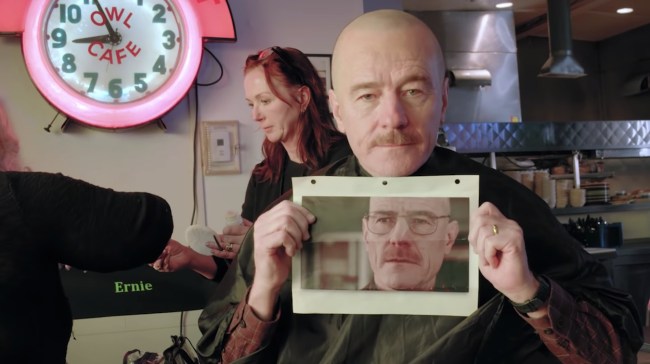 You ever smoked the pots? Done the marijuana? Toked the reefer?

Well, if you have, then maybe you recall back in the early days of stonery, when you would get so toasted that you would accidentally forget to stop smiling? “Oh fuck dude, I’ve been smiling for like 90 straight seconds, cut it out” said the internal monologue, that sort of thing?  Anyone relate?

That was me about 20 minutes ago as I was watching this El Camino: A Breaking Bad Movie featurette with Bryan Cranston and Aaron Paul — about three-quarters of the way into it, I realized I was just grinning like an absolute jackass for the past two-minutes.

Something you should know about me regarding my idiotic smile, though: I’m one of those people who will argue that Breaking Bad is every bit as good, if not better than, The Sopranos. Truth be told, in my heart of hearts, even I’m not quite sure where my opinion falls on the matter — depending what day of the week it is, I may give you a different answer — but I know I am always willing to at least make the argument.

If you haven’t seen El Camino, well A) what the hell are you doing, it was released in October, and B) you can catch it when it premieres on AMC on Sunday, February 16. Then, if you love the Breaking Bad universe as much as I do, you can catch the season five premiere of Better Call Saul the following Sunday on February 23.