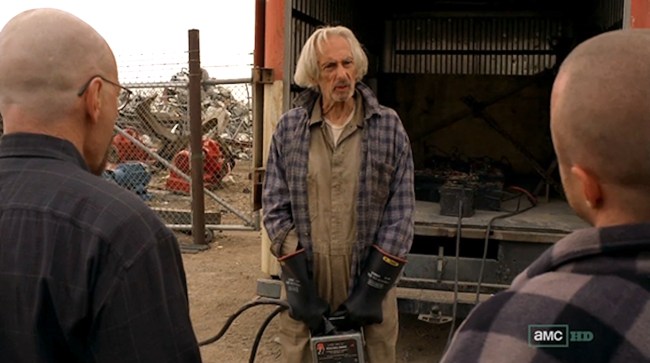 Just because the release of El Camino: A Breaking Bad Movie is less than two weeks away does not mean that Netflix is prepared to let fan anticipation and word of mouth carry the hype for the film, as they released yet another teaser trailer over the weekend.

In this latest 40-second teaser, simply titled “Go For Joe”, Netflix reveals that Breaking Bad fan favorite and shady junkyard Jesus Old Joe will be returning in the highly-anticipated sequel.

More than willing to assist Walter White and Jesse Pinkman in their various criminal conspiracies, Old Joe was there when they needed to hide and subsequently destroy The Krystal Ship and when they needed to rig a massive magnet in order to destroy some highly sensitive evidence.

And now, it appears that Old Joe is going to answer the criminal Batphone once again to help the on-the-run Jesse Pinkman.

In what appears to be just days — if not mere hours — after Pinkman escapes from the Neo-Nazi compound, Old Joe can be seen watching a news report about his old criminal acquaintance before answering a phone call from what seems to be the man himself.

In my breakdown of the epic first trailer for El Camino: A Breaking Bad Movie, I — like many other people on the internet — suspected that the booted feet we see overlooking a junkyard was Old Joe, as it’s likely him that outfits Jesse’s El Camino with a bed roof. Whether or not that’s his only contribution to Pinkman’s plot is yet to be seen.