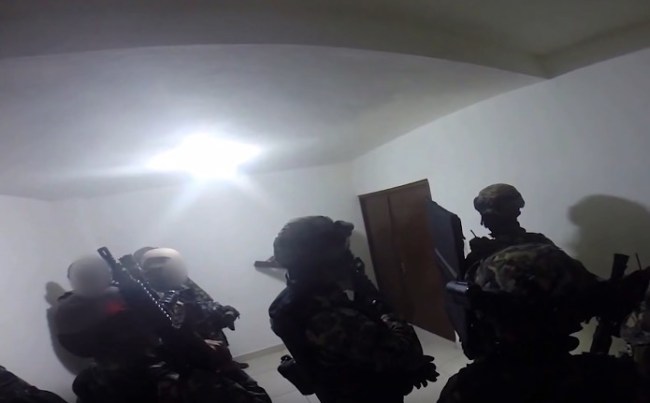 The trial of Joaquin ‘El Chapo‘ Guzman is currently playing out in Manhattan where the billionaire drug lord has been held since he was extradited from Mexico after being captured in an intense police raid in January 2016.

That wasn’t the first time that Mexican police attempted to apprehend El Chapo. He was previously captured in 1993 in Guatemala where he was sentenced to 20 years in prison (in Mexico) for murder and drug trafficking. He escaped prison by bribing the guards. He was then arrested again in 2014 after a raid where no gunshots were fired but he later escaped prison through an underground tunnel.

He was finally arrested in a 2016 raid and extradited to the United States in 2017, but it all started back in 2014 during this raid on his safe house in the city of Culiacán. Here, police followed tips to raid the house of El Chapo’s former wife but he was able to escape through an underground tunnel after police were held up for nearly 10 minutes but a steel reinforced front door.

This clip begins around 4am in Culiacán with police using a battering ram to try and take down the steel door at the safehouse. It then shows the tense moments of them entering the house and finding the underground tunnel which enabled him to evade capture. This raid was the major turning point in the pursuit of El Chapo and the beginning of the end for one of the most notorious drug lords in history.

This footage was shared by DEA agent Victor Vazquez during El Chapo’s current trial in New York. Vazquez gave testimony of how he and Mexican marines searched five of El Chapo’s houses in the areas to find that all of them were connected by underground tunnels.

According to VICE, Vazquez testified that he and the Marines found 2,800 packages of methamphetamine in one of the homes along with bananas stuffed with cocaine and a small arsenal of weapons including a rocket-propelled grenade launcher. They also found El Chapo’s personal handgun, a .38 Super with his initials engraved on the side.

El Chapo’s trial in NYC has produced bombshell after bombshell revelations. Most recently, his mistress shared text messages of El Chapo threatening her life while his wife laughed in court. This story about his lawyer’s affair with ‘Vegan Bernie Madoff‘ is pretty insane. And this revelation about how he was taken down thanks to his personal I.T. guy is wild.