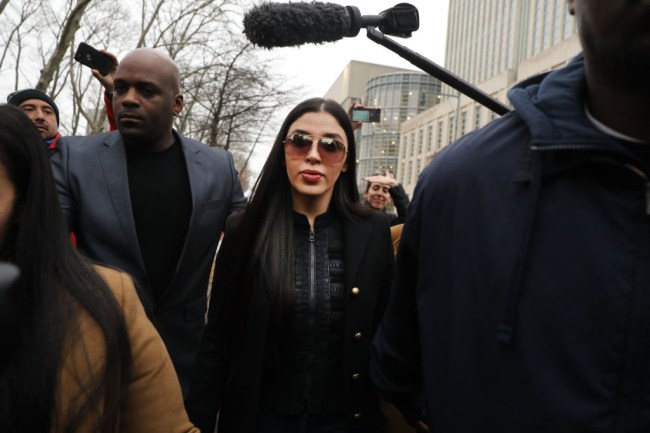 The wife of El Chapo might be interested in appearing on a VH1 reality TV show. Emma Coronel Aispuro reportedly met with another person with family ties to a famous drug kingpin to discuss the possibility of starring on Cartel Crew.

You’d think that the wife of notorious drug lord Joaquin “El Chapo” Guzman would keep a low profile and maybe not stick around the United States where her husband was sentenced to life plus 30 years at ADX Florence, the nation’s most secure supermax prison. However, the intoxicating lure of fame might cause Emma Coronel Aispuro to join the VH1 reality show Cartel Crew.

TMZ reported that former beauty queen Aispuro met with Cartel Crew castmember Micheal Blanco, who is the son of Griselda Blanco, the former Colombian drug lord of the Medellín Cartel known as “La Madrina,” “the Black Widow,” “the Cocaine Godmother,” and “the Queen of Narco-Trafficking.”

The 30-year-old Aispuro met Blanco in Miami, and it could be an opportunity for El Chapo’s wife to expand her own brand. TMZ shared photos of the two kingpin-related celebrities meeting on the water. Blanco’s boat pulled up to Aispuro’s yacht that had several bodyguards onboard in what looks like a very intriguing meet-up.

TMZ reported: “Sources say the deal on the table is for Emma to join the cast of Cartel and begin shooting ASAP.” But the media outlet added that “it wasn’t clear if Emma has any interest.”

Cartel Crew stars “the sons and daughters of cartel members give a glimpse into their personal lives as they navigate adulthood and the effects of their family legacies” according to VH1.

Cartel Crew debuted last January with 10 episodes and was picked up for a 7-episode second season that wraps up on November 18. The addition of El Chapo’s wife could give the struggling reality TV show new life and guarantee a third season.