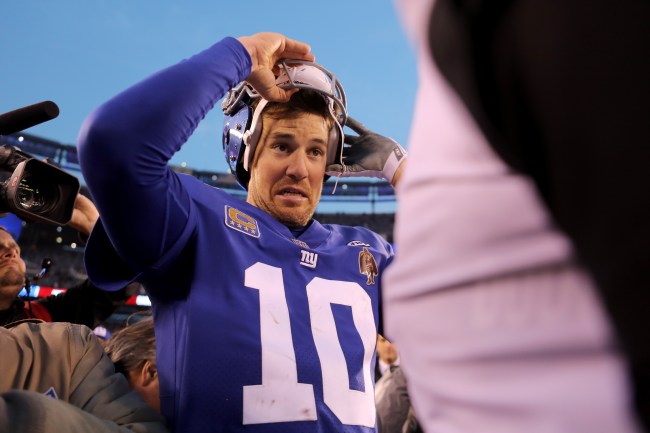 Eli Manning and the Giants’ 2017 was a punchline. The G-Men finished 3-13, their worst record in nearly 35 years, a year after an 11-5 playoff season. It was difficult to find a silver lining in the dumpster fire that was the 2017 season, but if there’s one positive takeaway it’s undoubtedly Eli Manning’s character highlighted in the face of adversity.

After starting the year 2-9, now fired Giants head coach Ben McAdoo benched Manning, who had previously started the last 210 games dating back to November of 2004. That incredible streak was only topped by Brett Favre. Despite the mind-boggling decision to bench a two-time Super Bowl winner for Geno Smith, Manning handled the injustice just about as well as he could have. A day after getting benched by McAdoo, Manning showed up to practice early to work with rookie QB Davis Webb.

Most recently, the four-time Pro Bowler demonstrated yet again that he was made of the good stuff when a Giants fan sent him a two-page handwritten letter inviting him to his wedding.

Instead of tossing the invitation into the trash, Manning took the time to respond. 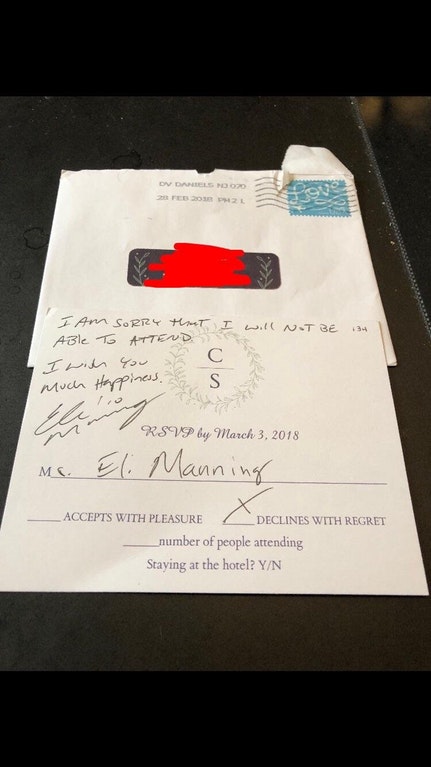 “I am sorry that I will not be able to attend. I wish you much happiness,” Manning wrote.

The dude who posted the photo on Reddit, a friend of the groom, had this to say:

“My buddy is a huge Giants fan. He’s getting married in a few weeks and he decided to write Eli a two page hand written letter inviting him. None of us actually expected him to respond but we should have known better. What an absolute class act. Completely made my friends day and he’s on his way to frame it right now.”

Eli is taking a page out of his older brother’s handbook with the wedding responses. Peyton responded to a couple back in April of 2016.

Wow! Shoutout to the G.O.A.T, Peyton Manning! My sister invited him to her wedding & this was his RSVP #Broncos #NFL pic.twitter.com/fADroiW270