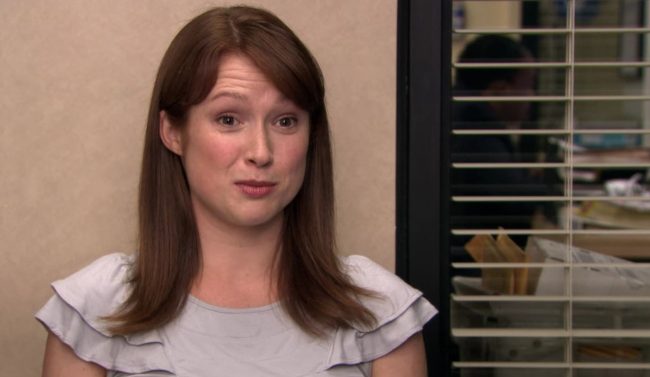 Actress Ellie Kemper, who has starred in popular comedy series such as The Office and Unbreakable Kimmy Schmidt, is being canceled by social media users who are calling her a “KKK princess” or a “KKK pageant queen”.

So was no one gonna tell me Ellie kemper aka kimmy Schmidt was crowned KKK queen in 1999 pic.twitter.com/QdHJ6wGZGv

While the St. Louis’ Veiled Prophet Ball has no direct ties to the Ku Klux Klan, the Veiled Prophet Organization previously barred African-Americans and Jewish-Americans from joining. Those rules were not changed until 1979.

According to The Atlantic, who wrote about the St. Louis’ Veiled Prophet Ball back in 2014, the event “emphasized the existing power structure” of St. Louis by a society of “wealthy and well-connected locals”.

Feeling the heat from industrial competitors to the North and labor unrest inside the city, the business elite of St. Louis decided in 1878 to double down on the static racial and economic power structure of the city. The Veiled Prophet Ball and Fair was a powerful symbol of that reassertion of control.

Seeing the first couple “Ellie Kemper was a KKK princess” tweets on the horizon pic.twitter.com/Tsx4GqKIeh

The #EllieKemper headlines and stories of being a KKK Princess is not what I expected in 2021.

Moral of the story: trust no White woman until proven otherwise. pic.twitter.com/RmJPuR8TMR

it really is something that Ellie Kemper was the star of a tv show about a woman who leaves a racist cult and tries to rebrand herself while pretending it never happened. no reason why I'm bringing this up of course.

So…Ellie Kemper was a KKK princess??? And no one knew about it???

Not everyone was quick to cancel Kemper, though:

People are falsely saying Ellie Kemper was in a KKK beauty pageant. The org reinforces the racist power structures that birthed it but also it’s not the KKK and was accepting Black members by the 70’s. Shit’s complicated, American institutions are racist. https://t.co/9q77MvJfQX

There is not a single iota of evidence that Ellie Kemper is racist. So naturally, Twitter is trending her and blue checks are calling her a "KKK princess." What absolute garbage.

It’s fascinating that people are focused on whether Ellie Kemper was deb in a racist group at 19, & not whether her father & uncle, both major bank CEOs, belonged to that organization

At the time of this writing, Kemper has yet to make a public statement on her participation in the St. Louis’ Veiled Prophet Ball.

In addition to her role of Erin Hannon in The Office and Kimmy Schmidt in Unbreakable Kimmy Schmidt, Kemper is known for her roles in films such as Get Him To The Greek, Bridesmaids, 21 Jump Street, Identity Thief, Sex Tape, The Secret Life of Pets, and The Lego Batman Movie. She’s also set to star as Pam in Disney’s upcoming Home Alone remake.