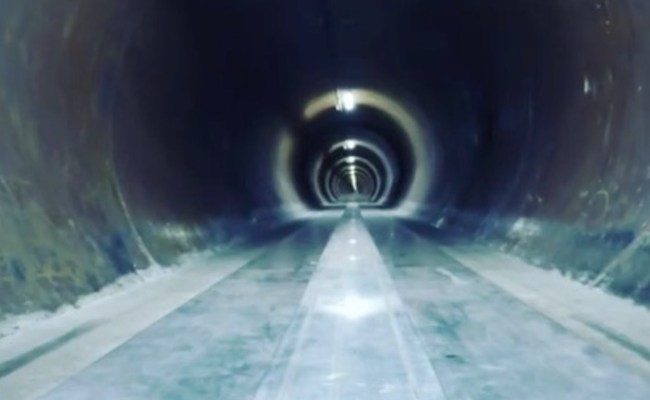 Elon Musk was the co-founder of PayPal, he’s also the founder and CEO Space X and Tesla. You’d think that a man with so many irons in the fire wouldn’t have time to try and built out a new form of transportation for the world, but you’d be wrong. Elon’s also working on building the Hyperloop.

The concept for the Hyperloop was unveiled by Elon Musk back in 2013, and now there’s a working prototype after the idea recently received government approval. The idea is to use reduced-pressure tubes for high-speed travel and capsules large enough for people and cargo to be stored in will be pushed through these tubes using air compressors and motors.

Yesterday, Elon shared a video of the Hyperloop in action. In this clip, we see the Hyperloop WARR pod accelerate from 0 to 201 MPH in a 0.8-mile near vacuum chamber:

To be clear, a Hyperloop passenger version wouldn't have intense light strobe effect (just for testing), nor uncomfortable acceleration

Hyperloop (near) vacuum tube runs parallel to SpaceX on Jack Northrop Blvd. It is 0.8 miles long and just under 6 ft in diameter.

If this is the future of travel I’m totally on board with this. It’s not exactly feasible to have these tubes running underground everywhere in the nation, but from L.A. to Las Vegas this is totally an option, or from L.A. to San Diego…New York to Boston, Washington D.C. to New York…These are all feasible trip options for the Hyperloop that I can get on board with. (h/t DIGG Video)