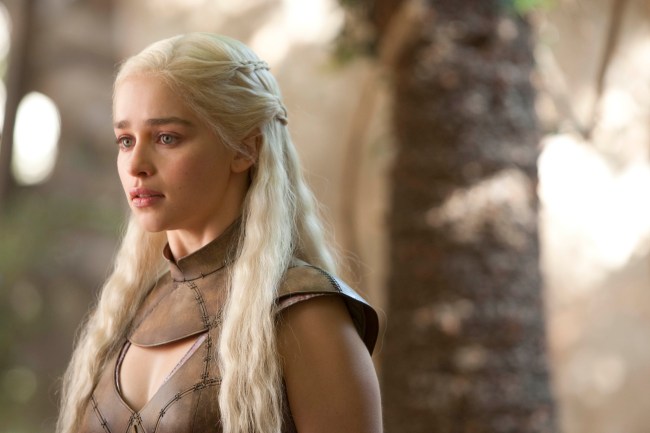 Once the British actress received the scripts for Season 8 of Game of Thrones, she had a depressing reaction when learning her character’s fate. Once she read what happens to Daenerys in Season 8, she walked through London for “three hours, aimlessly.” “It might as well have been raining, and I would’ve just walked in it not knowing what to do,” Clarke explained.

“That was the moment I realized that alcohol can also be a depressant,” Clarke said. “I was kind of nursing a glass of wine going, ‘I don’t know why I’m not getting any happier from this.'” Did you try a Dornish red? Those are supposed to be exquisite.

Emilia added that there were “loads of tears” while she filmed her final scenes as the Dragon Queen. These don’t exactly sound like the reaction to someone’s character sitting on the Iron Throne as the rightful ruler of Westeros.

Emilia isn’t the only GoT actor to warn that the last season will be tragic. Gwendoline Christie AKA Brienne of Tarth said, “I think just the show ending is going to send all of the world into professional help.” Meanwhile, Kit Harington, who plays Jon Snow, revealed that his wife and fellow Game of Thrones castmate Rose Leslie “wouldn’t talk to me for about three days.”

We also learned that the first episode of Season 8 will be 54 minutes and the second episode will be 58 minutes. It sounds like you will need to have numerous bottles of your favorite elixir to deal with the tragedies and heartbreaking deaths that are sure to come in the final Game of Thrones season that begins on April 14th.