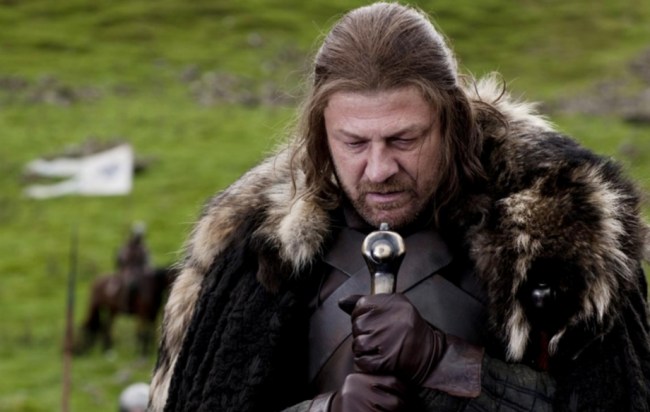 With only 43 days until the final season of Game of Thrones debuts, fans are drooling over any new content that HBO throws their way. Especially since HBO has yet to release the official Season 8 trailer yet. So fans scrutinized the heck out of new Game of Thrones posters that were released and found a potentially disturbing detail.

On Thursday, HBO released 20 posters for the final season of Game of Thrones. All of the posters were portraits of the major characters left in the hit HBO TV show and they were sitting upon the Iron Throne.

Will #DaenerysTargaryen rule the realm?
Break the wheel #ForTheThrone pic.twitter.com/0gfKZLzIPS

Musical chairs – game of thrones style. The song chosen ? Rains of castamere. The Game is coming to an end. #JaimeLannister #finalseason pic.twitter.com/nWBNh1j39F

#QueenCersei #ForTheThrone
Pledge your allegiance and tweet who you think will rule the realm. pic.twitter.com/AUCJXuHFwk

RELATED: ‘Game Of Thrones’ Fan Theory Says An Army From The North Will Save The Starks From The Night King

I love all the new @GameOfThrones promos but this is the only one that matters pic.twitter.com/tpFHu44E4D

Winter is here.
Use #ForTheThrone to pledge your allegiance to the #ArmyoftheDead. pic.twitter.com/2z5OdhrJMG

Even Euron Greyjoy got to sit on the Iron Throne and actor Pilou Asbaek was super stoked.

#ForTheThrone @GameOfThrones
Saved all the new posters to my phone! 🤘 pic.twitter.com/O9hMvFDOLb

RELATED: Awful Lost ‘Game Of Thrones’ Pilot Found And Is Much Different Including Talking White Walkers And Drunk Jon Snow

But GoT fans honed in on one poster in particular — Jon Snow.

Win or die #ForTheThrone.
Retweet this Tweet to see who remains in the realm. pic.twitter.com/6b5GYM5GWQ

In the poster, fans noticed something in particular… no it isn’t that it appears that Jon Snow is wearing eyeliner and is pretending to be Pete Wentz in a Fall Out Boy cover band. The Game of Thrones enthusiasts thought that Jon’s pose on the Iron Throne looked familiar. Like Ned Stark’s poster from Season 1.

Like father, like son. This could be that Jon has been following in his father’s footsteps. Off the top of my head, this could be coincidental. This could be HBO doing this on purpose so that there are more fans theories going into the final season.

Or maybe everyone knows where this could be heading. Could mean that Jon will end up like his father and have his head chopped off? Everyone calm down, nobody lose their head, this is all just a very eerie coincidence. Hopefully.