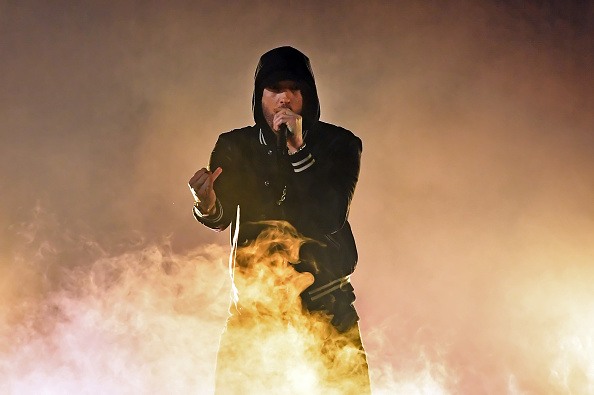 Eminem wants to wish you a Merry Diss-Mas. The illustrious rapper gave the gift of dissing on Christmas when he named his 12 favorite diss tracks. Eminem also paid homage to all-time greats Tupac Shakur and Biggie Smalls as he revealed their impact on his music.

On Christmas morning, Eminem appeared on SiriusXM’s Shade 45 radio station to participate in the “12 Days of Diss-Mas” with long-time manager Paul Rosenberg and DJ Whoo Kid. The Detroit rapper rattled off his favorite diss tracks that are from some legendary MCs such as Tupac, Eazy-E, Dr. Dre, Ice Cube, LL Cool J,
MC Lyte, KRS-One, and Roxanne Shanté.

Pac’s diss track “Hit ‘Em Up” aimed at friend-turned-foe the Notorious B.I.G. was Em’s most beloved diss track in history and he said it was a game-changer. “That, I feel like, was the first time I ever heard anybody get that personal on a diss. Most of it was personal, below-the-belt jabs, but it was done so well and the record was just so crazy,” Eminem said.

Eminem also noted how the East Coast-West Coast hip-hop rivalry affected him, especially the rap war between Tupac and Biggie. “The 2pac-Biggie thing was tough because you liked them both,” Em said. “You were stuck in this weird thing where you were bumpin’ a 2Pac diss record, then you were bumpin’ something from Biggie that might be dissing [2Pac] in it.”

Tupac’s not only said that he slept with Biggie’s wife Faith Evans in the diss track, but threatened to take out anyone affiliated with Bad Boy Records and Junior M.A.F.I.A. including Sean “Puffy” Combs and Lil’ Kim. Mobb Deep was collateral damage from “Hit ‘Em Up” and lyrics “made fun” of Prodigy for having sickle cell anemia. Hip-hop ain’t what it used to be.