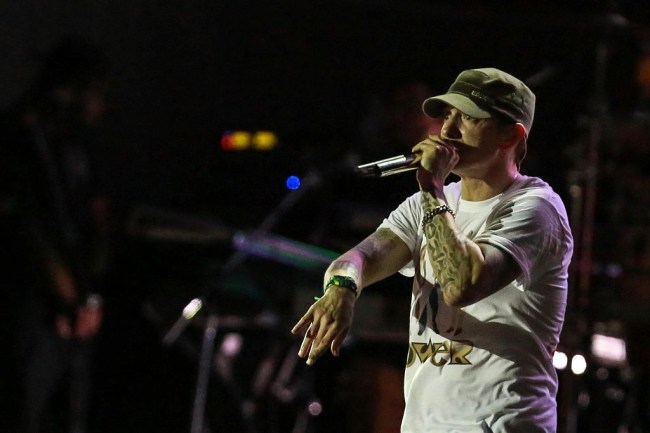 Eminem is being called out for wearing blackface by a fellow rapper. But the rap beef doesn’t stop there, rapper Lord Jamar also said that nobody listens to Eminem’s music and that Marshall Mathers is trailer park trash.

The hip-hop group have gotten back together throughout the years, and Lord Jamar has also dabbled in podcasting as well as acting, and you may have seen him in Oz, The Sopranos, Third Watch, and Law & Order.

Lord Jamar has also taken up an interest in having a rap beef with Eminem. In the last week, Lord Jamar has taken some jabs at Em in response to Slim Shady dissing him on his new album Music To Be Murdered By.

In Eminem’s new track I Will, there are lyrics that take shots at Lord Jamar whose real name is Lorenzo Dechalus.

“Got a crown of thorns, but it won’t fit around the horns/But I’ma keep it a buck like a dollar store/I’m more than you bargained for and I am far more worse/Than a 40-some bar Lord Jamar verse.”

Lord Jamar recently sat down with DJ Vlad to discuss the diss track aimed at him and his feelings toward Eminem.

“I live rent-free inside Eminem’s f*cking brain,” Lord Jamar told DJ Vlad. “I got squatter’s rights in that b*tch, okay? And might I say, it’s f*ckin’ filthy in there.”

Lord Jamar continued his assault on Eminem by saying that nobody is listening to Slim Shady in the hood.

“I know what this b*tchass said, I’m still unscathed,” Jamar continued. “Guess what? Motherf*ckers still ain’t listening to that in the hood. Nobody came to me in the hood and was like ‘Yo, I just heard this Eminem song where he went at you.’ My point is proven! Nobody listens to your f*ckin’ shit. So I’m chillin’ right now. You could talk about me a million times.”

Lord Jamar also said Eminem has a “colonizer’s mentality when it comes to hip-hop.” He added that Slim Shady’s Music To Be Murdered By album is “trash.”

Lord Jamar also said that Eminem committed “blackface” when he wore a Will Smith mask when he accepted an award remotely during the MTV Europe Music Awards.

“It’s a mockery of black people, like a white dude wearing any kind of black mask is problematic and should be explained,” Jamar said. “I just wanna know what the whole context was. Could it be explained?'”

“I know at the time a lot of people in hip-hop, black people, might have looked at Will Smith as kinda corny and straight-laced, but that’s for us to do,” Lord Jamar said. “You can’t cross the line that maybe one of us could have done. But you as a white guy can’t do that.”

In November of 2019, Lord Jamar posted the photo of a blonde Eminem wearing the Will Smith mask on Instagram. The since-deleted post was captioned: “Hey @eminem please put this in context for me…I’m trying to understand why you’d be clowning in a BLACKFACE MASK backstage at the MTV AWARDS? You should come on the YANADAMEEN GODCAST so we can discuss this among other things.”

Lord Jamar also wrote a tweet that said: “If it is a WILL SMITH MASK, what gives this WHITE BOY the right to wear it? Especially in EUROPE where he knew he could get away with it, also if it’s NO PROBLEM then why have these pics been hidden up until now?”

During the interview, Lord Jamar also made a reference to Eminem’s song Foolish Pride, where there were some racist lyrics. Marshall Mathers made the track in 1998 when he was 15-years-old.

“Blacks and whites they sometimes mix/But black girls only want your money ’cause they’re dumb chicks/Don’t date a black girl/If you do it once you won’t do it twice/Black girls are dumb, and white girls are good chicks.”

It is the same song that Nick Cannon sampled in his Eminem diss track Canceled: Invitation. Mathers has since apologized for the insensitive lyrics.

“The tape they played today was something I made out of anger, stupidity, and frustration when I was a teenager,” Mathers said in November of 2003 statement. “I’d just broken up with my girlfriend, who was African-American, and I reacted like the angry, stupid kid I was. I hope people will take it for the foolishness that it was, not for what somebody is trying to make it into today.”

Eminem also called out Jamar on his 2018 album Kamikaze, in the song Fall.

“And far as Lord Jamar, you better leave me the hell alone/Or I’ll show you an Elvis clone. I belong here, clown! Don’t tell me ’bout the culture!/I inspired the Hopsins, the Logics, the Coles/The Seans, the K-Dots, the 5’9″s, and oh/Brought the world 50 Cent — you did squat, p— and moan.”

On an interview on Flip Da Script earlier this month, Lord Jamar said that Eminem was not the GOAT.

“He’s a good rapper but he’s not my cup of tea,” Lord Jamar said of Eminem. “I’m just saying if black people, [who] are the creators of hip-hop, don’t crown you the GOAT, you not the GOAT. That’s it. If it sounds hateful to you, that’s your f*ckin’ interpretation. But I’m tellin’ you, that’s my only thing.”