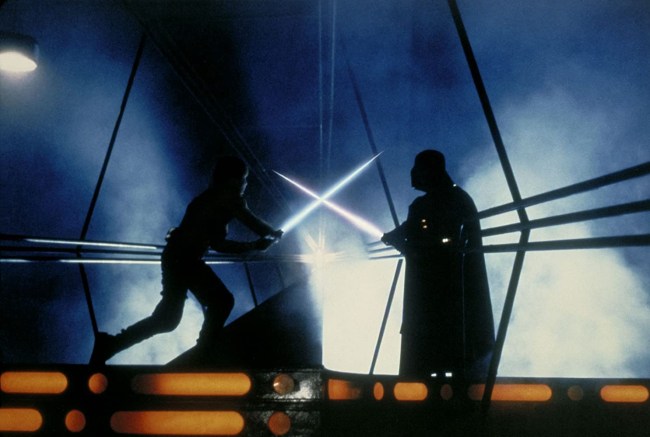 While I certainly love Star Wars, I wouldn’t consider myself a full-blown Star Wars nerd.

I’ve never finished The Clone Wars and I don’t know the intricate details about the galaxy far, far away. I’ve literally never seen Solo and I’ve only watched the original trilogy a handful of times. I also think The Last Jedi is the best film in the sequel trilogy (please don’t murder me).

Still, though, I do generally engage with the culture: I loved The Mandalorian and have been playing a ton of Star Wars Jedi: Fallen Order. On the scale of Star Wars fandom, I’d say I’m about right smack dab in the middle.

That all said, I am a big enough Star Wars fan to be absolutely stunned by the fact that George Lucas apparently changed the ending of The Empire Strikes Back *after* it was already in theaters.

In celebration of the film’s 40th anniversary, the official Star Wars website has been releasing exclusive and behind-the-scenes interviews and stories, and in one of them, it’s revealed that Lucas meddled with the film’s ending despite the fact that the movie had already hit theaters.

Industrial Light & Magic general manager Tom Smith explained to J.W. Rinzler, author of The Making of The Empire Strikes Back that after Lucas had attended one of those early public screenings, he had “realized that the end of the film was unclear.” (What makes this all even more hilarious is that the movie’s actual director Irwin Kirshner seemingly never had a say in the matter.)

Apparently, what was unclear was where the characters were in relation to each other, geographically – where were Chewbacca and Lando in relationship to Luke, Leia and the droids? Were they on the same ship or separate ships? Where was the Millennium Falcon in relation to the medical frigate where Luke was recuperating? To Lucas it was all terribly unclear. Which is why he was determined to fix it before the movie’s June 18th wide release.

Lucas convened a small group that included ILM cameraman Ken Ralston and artist (and future filmmaker) Joe Johnston at Lucas’ “Egg Company” office in Universal City (at the bottom of the hill; it’s now a subway station). They would design the new shots in Los Angeles before sending them to Industrial Light & Magic, then located in San Rafael. The bulk of the work consisted of three new shots: one establishing the Rebel fleet (including what are assumed to be refugees from the initial Hoth battle), another shot that moves into the Millennium Falcon, better establishing that it is a very separate entity and that Lando and Chewbacca are inside, and a third shot, moving from the Millennium Falcon to a port on the medical frigate. As StarWars.com notes, “there was a direct cut from the Falcon cockpit to the medical bay, with no visual cue to understand that Luke and Leia were aboard a separate ship.” [via Collider]

Lucas obviously knew what he was doing, as The Empire Strikes Back is not only considered to be the pinnacle of the Star Wars franchise, but it’s also thought of as one of the best movies in the history of American cinema.