Telling People Not To Come To Work Sick Is Completely Pointless 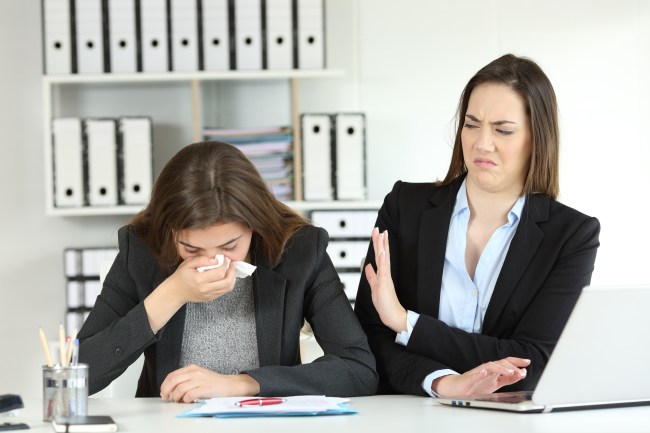 Have you ever gone to work sick? Of course you have. Unless you’re a complete hypochondriac bitch, you’ve sucked up some sniffles, ripped a few lines of Sudafed, and trooped in to the cube through a fog of shifting brain mucus. The flu game is the flu game because Jordan came to work. More broadly, athletes take cortisone shots and throw a double tape job on those high ankle sprains, coming back a week ahead of the trainer’s timetable; employees stuff a portable tissue pack in their pocket and brew a thermos of eucalyptus mint tea. Sure, you want to help the team, but you also don’t want everyone to think you’re a primadonna. And you especially don’t want to give your boss that impression.

Sometimes, there’s a thin line between milking it and what the fuck are you doing here? Obviously if you have a fever over 100, or you’re throwing up, or your skin is breaking out in something you’ve never seen before, you stay home. But it gets tricky with a cold, because everybody can technically type through a cold. We’re not going to hurt ourselves further by playing through a cold. At worst, you’ll prolong your recovery period by not getting the rest you need. Of course you’ll get everyone else sick in the process, but it’s usually tough to trace the outbreak back to you, patient zero.

Colds are the back pain of sick days—tough to know how bad it is, and often doubted by those around us. We don’t feel bad for people with colds. We either want to stay the fuck away from them or we doubt the veracity of their carrier. Because everybody has used a cold to get out of something: a date, a birthday party, helping your buddy move. It’s the perfect scapegoat because it’s usually gone in a day or two, so if you see the person shortly after your cancelled plans, it’s possible that your now-perfect health is a product of your 5G immune system. “I got a lot of sleep, took some Emergen-C” you might say, and that’s the end of that.

If you’re the boss of a company, telling your employees not to come to work sick is about as useless as telling them not to date each other. If you don’t want me to flirt with a coworker, don’t subsidize an open bar at the Christmas party. If you don’t want me to come to work with a cold, don’t give me a job that requires daily oversight. That’s straight from the CDC, brother.

Colds are so common that we actually call them “the common cold.” You don’t hear that about any other disease. There’s no “common shingles” or “run-of-the-mill epileptic fit.” It happens every year, to pretty much everyone, and there’s nothing you can do about it. At least that’s the case most years. Right now, we’re dealing with a cold of a different nature—one that kills grandparents and Chinese whistleblowers. And when the term “pandemic” gets thrown around, all the old rules about coming to work sick get thrown out the window.

But in general, we go to work with a cold. Especially on a Monday and a Friday. If you take a sick day on a Monday or a Friday, everyone thinks you’ve snuck off for a covert long weekend. How convenient that you came down with a cold after day-drinking 17 bud lights on NFL Sunday. What a coincidence that clogged sinuses didn’t stop you from that first chairlift at Vail. The only safe way to call in sick with a cold is by showing up to work on a Monday or Tuesday, letting everyone loudly know that you’re getting sick (lay the foundation), and then calling in EARLY, BEFORE WORK the next morning to say that you’re so sorry, you tried everything, you went to the doctor, you got 14 hours of sleep, but you just think it would be better for everyone else if you took this Wednesday off. And with that, you’re a hero.

Someday, we’ll have sick detectors at the office. Like a metal detector, you’ll walk through a scanner that will scan your immune system for harmful pathogens and viruses. If you don’t make the cut, you turn right around and work from home. But until that day comes, you can expect to get a cold at work. And no amount of fist-bumps or Purell can stop it.

A sobering stat during coronavirus fears—90% of employees admit they have gone to work when sick. https://t.co/HlBQw1ex5v