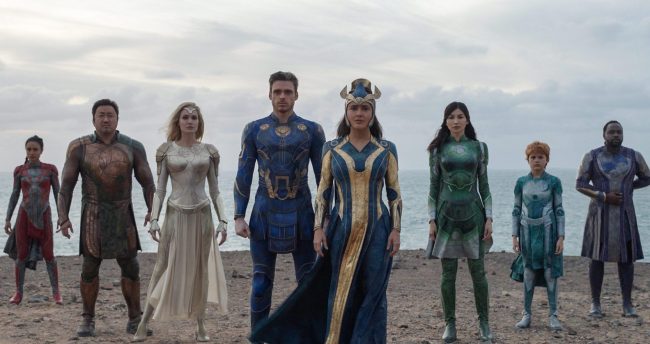 Eternals is probably the most excited for a Marvel Cinematic Universe film since Avengers: Infinity War back in 2018. I’m a sucker for what I like to refer as “romantic sci-fi” — a sub-genre of science-fiction that features a star-crossed romance in its A-plot — and Chloe Zhao’s Eternals seems to be RIGHT up that alley.

Still slated to hit theaters on November 5, Marvel Studios dropped the final trailer for the superhero epic on Thursday morning, and with it came not only our best look yet at the Eternals and their powers, but also their rivals the Deviants and Kit Harington’s Dane Whitman, a.k.a. The Black Knight.

According to reports, Harington’s Whitman, not one of the Eternals, will be the love interest of Sersi, played by Gemma Chan. While Sersi had spent thousands of romantically involved with Ikaris — played by Richard Madden — she’d come to fall for Whitman, a human, after the Eternals went their separate ways hundreds, if not thousands of years ago. And that’s what’s most exciting about Eternals: ever since Iron Man debuted in 2008, the MCU has largely taken place in the present day outside of the likes of Captain America: The First Avenger and Captain Marvel. Eternals, obviously, is set to blow that timeline wide open as the film spans a mind-blowing 7,000 years. Plus, the film is directed by Chloe Zhao, who just cleaned up at the Oscars thanks to her film Nomadland.

RELATED: Fans Have Minds Blown As ‘Eternals’ Trailer Fulfills Promise From The ‘Game of Thrones’ Pilot