The Cargo Ship Stuck In The Suez Canal Has Been Freed, But The Problem Isn’t Fixed Just Yet 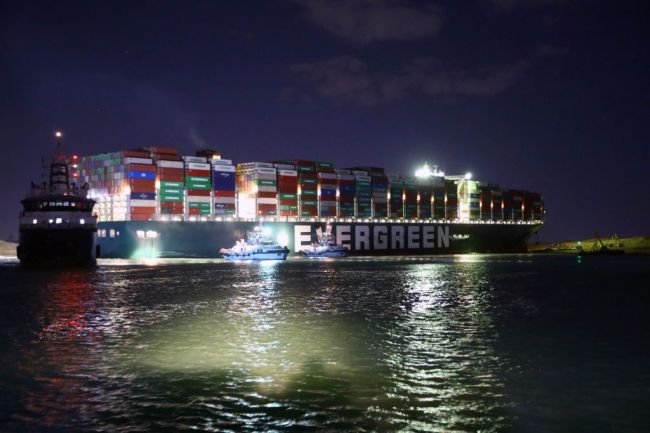 After nearly six days of being stuck in the Suez Canal, the Ever Given is now afloat. While the massive vessel has been refloated, it still needs to be maneuvered away from the bank and into the canal to be able to free the passage. It is currently being secured and the parties involved are hopeful that trade will resume through the canal as early as midday on Monday.

One video appears to show the skyscraper-sized vessel turned parallel with the bank, which is a great sign. It might even be moving forward slightly.

The ship’s bow was successfully dislodged at 4:30 a.m. local time after being jammed diagonally in high winds early on Tuesday, halting shipping traffic on the shortest shipping route between Europe and Asia. Hundreds of boats were forced to anchor on either side of the canal, causing a huge disruption in the global supply chain. It also made for some pretty awesome memes.

After three days of unsuccessful attempts, some of Egypt’s top officials offered an optimistic timeline on Friday, and it turns out that they were pretty close. The tugging operations to free the vessel were paused on Sunday to wait for extra tugboats to arrive. Meanwhile, more excavation and dredging was carried out under the ship— hoping to dig out a depth of 59 feet.

Once the extra tugs arrived, efforts intensified as the salvage companies hoped to take advantage of a high tide. That’s exactly what happened, and the Ever Given shifted nearly 45 degrees at its stern.

Here was the scene after the ship responded successfully to refloating efforts:

Watch: Ships blow their horns moments after #EverGiven is re-floated, almost one week after it had blocked the #SuezCanal. https://t.co/PmPvRx2o5B pic.twitter.com/YsaPSDWYQH

It took more than 10 tugboats and several dredgers at full spring tide to see any progress in freeing the ship, but they got it done. Those same boats will now continue to work and ensure that the vessel can begin to move up the canal. From there, it will be moved to port and the canal will reopen for trade.