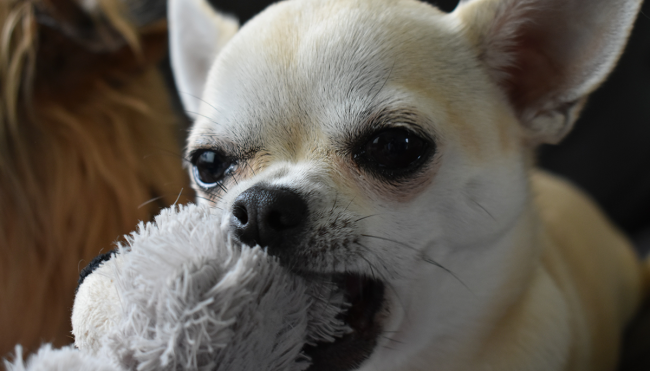 I have always been a Dog Person with what I consider a perfectly rational hatred of cats, as I’m not a huge fan of animals whose relationship with humans is defined by an unspoken truce in which the pet agrees to not slash their owner’s throat as long as they routinely supply it with food.

With that said, I’m pretty sure I’d rather live in a home surrounded by felines than cohabitate with a single Chihuahua.

The fact that the tale from Scary Stories To Tell In The Dark concerning a family that rescues a tiny hairless dog from the streets of Mexico only to discover it’s actually a disease-infested rat seems like a pretty plausible mixup tells you everything you need to know about the inherent awfulness of that particular breed.

I can’t count the number of times I’ve spotted a Chihuahua wearing a sweater that does literally nothing to stop it from trembling uncontrollably and thought, “That doesn’t seem like an animal that needs to exist.” However, there are plenty of people who have an undying love for these five-pound bundles of terror whose primary raison d’être is to incessantly bark at absolutely nothing.

It’s safe to say a woman named Tyfanee Fortuna does not count herself among them based on one of the only good things to come out of Facebook in recent memory.  Last week, she posted a cry for help after repeatedly trying to find a new home for Prancer, who she willingly brought into hers before it was transformed into a “demonic Chihuahua hellscape” courtesy of the “neurotic, man-hating, animal-hating, children-hating gremlin” she discovered he is.

If you manage to make it through this entire thing without crying tears of laughter, you’re a much stronger person than I’ll ever be.

I can’t describe how much enjoyment I got out of a plea filled with sentences that made me audibly guffaw while working my way through it. I don’t know if Facebook posts are eligible for a Pulitzer, but it certainly deserves one if only for the description that positions Prancer as “a vessel for a traumatized Victorian child that now haunts our home” (closing it out with “He’s only 2yrs old and will probably live to be 21 through pure spite” is also a masterclass in creative writing.)

As Buzzfeed notes, plenty of people came to his defense and seemed down to willingly adopt “a Chucky doll in a dog’s body” despite Fortuna simply giving up on attempting to figure out a way to make the concept sound appealing.

I wish anyone who ends up doing so the best of luck.