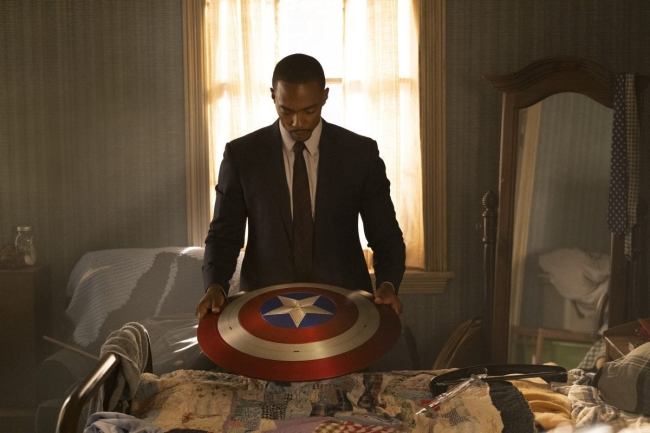 In a non-pandemic alternate universe, The Falcon and the Winter Soldier is actually the first Marvel Cinematic Universe series to premiere on Disney+, doing so in August of 2020. Obviously, as we now painfully know, we very much do not exist in that universe and are instead trapped in this one. Sort of like what’s going to happen to Spider-Man at the end of No Way Home when he realizes he’s now stuck with Jared Leto’s Morbius.

Ultimately, Marvel Studio’s having to reshuffle their Disney+ release schedule might have been a blessing in disguise, as WandaVision — despite its obvious oddities — has done a fine job so far of capturing the attention of the pop-cultural zeitgeist (it’s literally the most popular TV show in the world right now).

While WandaVision has been an eccentric experiment for the MCU, The Falcon and the Winter Soldier promises to be a more traditional, buddy-cop action film, as evidenced by the trailers we’ve seen so far, which are mainly trying to highlight how *fun* this series is going to be. But in addition to being a traditional action romp, Falcon actor Anthony Mackie is teasing that the series will also serve as an origin story for his character Sam Wilson.

“I think people see that, and they enjoy that because they can look at Sam and see themselves in that character. Like, we can’t be the Incredible Hulk—he’s the Incredible Hulk! The Falcon is a regular guy who just happened to meet Captain America and volunteered as a fellow soldier to try and save the world. Sam is always Sam. The way it’s written and the way they’ve been playing it is he’s always going to be Sam. The great thing about the series is you get to learn his entire backstory, his life, who he is, and how he became Sam Wilson.” [Disney’s D23 Magazine, via The Direct]

The Falcon and the Winter Soldier will premiere on Disney+ on Friday, March 19. We’re covering that, the finale of WandaVision and all things Marvel Cinematic Universe on the Post-Credit Podcast, so make sure to give that a listen.