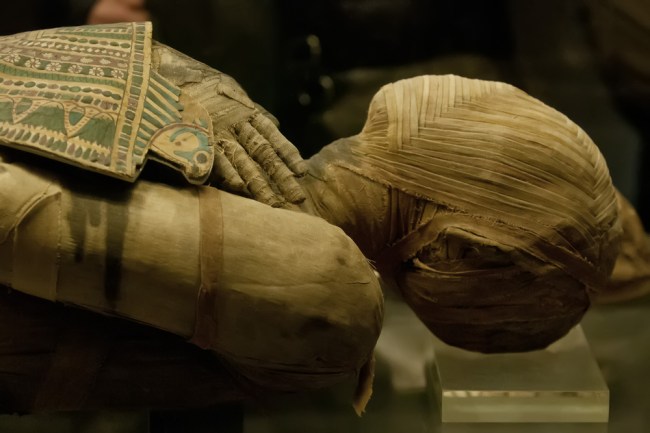 Last month, we brought you the story of how the FBI was assisting in the investigation of a ton of gold worth $55 million from the Civil War. Now the FBI is going back, way, way back to help solve an ancient mystery. The Federal Bureau of Investigation has cracked its oldest case ever, a mysterious Egyptian mummy that is at least 4,000-years-old.

A mummified head was recovered from an ancient Egyptian tomb in 1915 and ever since then, researchers have been wondering who the head belongs to. They had suspected that the head belonged to an Egyptian Middle Kingdom governor named for Djehutynakht or his wife, but nobody was sure. The mummy is 4,000-years-old and researchers are not sure whether it was male or female.

Grave robbers ransacked the ancient Egyptian necropolis of Deir el-Bersha and stole its gold and jewels. The tomb raiders tossed a headless, limbless mummy into a corner of the Djehutynakht burial chamber before attempting to set the room on fire to cover their tracks. For hundreds of years, the researchers were unsure who the mummy was so they enlisted the services of the FBI. The problem was that the FBI had never worked on a specimen that was so incredibly old.

A museum wasn’t sure whose head they had put on display. That’s when the FBI’s forensic scientists were called in. https://t.co/URMhm8SPD9

The FBI’s forensic scientists were called in to crack the agency’s oldest case. For over hundred years, researchers debated whether the mummified head belonged to the Egyptian governor or his wife. Then in 2009, Dr. Fabio Nunes, then a molecular biologist at Massachusetts General Hospital, extracted a tooth from the mummy and helped solve the puzzle. They gave the tooth to the FBI. Odile Loreille, an FBI biologist, drilled into a tooth and collected the powder, then dissolved it in a chemical solution.

The Federal Bureau of Investigations analyzed advanced DNA sequencing technology and was able to determine that the DNA was male after counting the ratio of chromosomes. Meaning that the mummy was of governor Djehutynakht. The FBI published their findings in the journal Genes. The FBI solved the 4,000-year-old mystery.