If You Feel ‘Betrayed’ By Borat, Grow Up 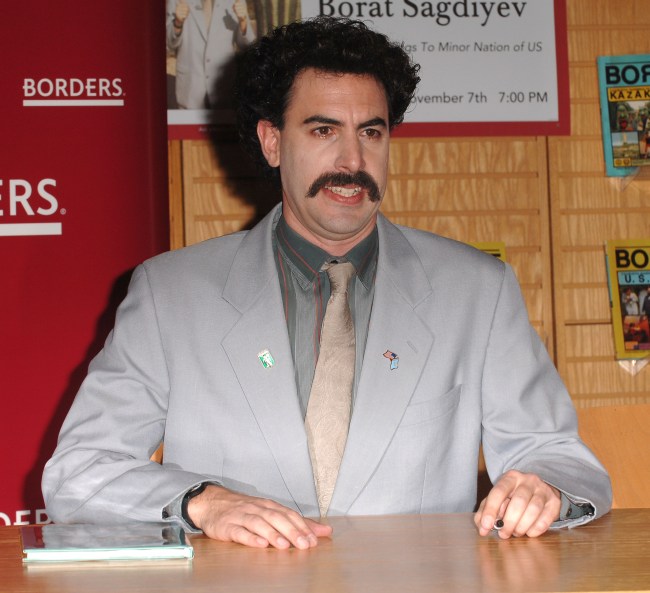 A woman who appeared in the new "Borat" film said she felt "kind of betrayed by it.”😳😬

We'll explain the latest controversy it has caused ⬇️⬇️⬇️ https://t.co/uJnkVkxgW6

Author’s note: This is not a shot at Jeanise Jones. She’s a shining light in a world of darkness, and we should all follow her example. This blog is meant more for the people who are angry that Sacha Baron Cohen continues to make anyone and everyone look stupid.

Are you guys aware of how people end up without their faces blurred in movies/TV? The only way that happens is if the person SIGNS THEIR NAME on a document, giving the producers the right to show their face. YES, Sacha Baron Cohen and his team are notorious for obfuscating those releases. YES, they’re doing their best to set up deep, long cons to throw people off the scent. YES, innocent, unsuspecting civilians are not going to meticulously study a 20-page Hollywood release and will end up as collateral in a blockbuster comedy they thought was a travel documentary.

Who cares! That’s part of the fun! There is a clear distinction between the people SBC targets for ridicule and the people he uses as foils to ridicule his character. The “likable” people—the grandmother babysitter from Borat 2, the guy who helps him send all those faxes like they’re text messages, the driving instructor from the first Borat, etc.—aren’t being made to look bad. In fact, they look good! We love them for their good-hearted efforts to embrace cultural differences, to educate gently, to work around insane eccentricities that make them uncomfortable. These people comport themselves with patience, grace, and forgiveness. They’re model citizens! Need proof? Here’s the GoFundMe description that was set up for Jeanise Jones, the grandmother/babysitter.

Jeanise Jones is a Mother(3), Grandmother (6), faithful church member and just an overall great person who will help anyone. She recently emerged as the “STAR” in the new Borat movie. She was recruited from our church the Ebenezer Baptist Church in Oklahoma City after Producers spoke to me about needing a “Black Grandmother” for a small role in a “documentary.” Jeanise emerged as that person and she was completely unaware that this was a comedy, and all of this was made up. We have been praying for the young lady in the movie because we all genuinely thought she was in trouble. The joke is on us/Jeanise and that’s no problem. Many of you have reached from around the world to say thank you, so I thought it would be great to give people a vehicle to say thank you in a tangible way, She wasn’t paid much money at all for her role in this movie.

Tremendous. What a great attitude from the pastor. “Jokes on us, no problem.” Love that! Thick skin like you hope for!! And for their troubles, at this moment, her GoFundMe sits at $70,000 and RISING.

The universe rewards those who can laugh at themselves.

And if that isn’t enough, just sue him, collect your settlement, and move on with your life.

On the flipside, you’ve got his “marks.” These are your Rudy Giulianis, the frat boys in the RV from Borat 1, and anyone who doesn’t raise an eyebrow when he puts his daughter in a cage, for example. They’ll rant and rage about the unfair tactics he used to trick them into his movie.

But there’s a simple defense against having your life ruined by being on the wrong side of a Borat prank: act like a human being. Don’t say things like “It would be a better country, we should have slaves” when you KNOW, at the very least, that you’re on camera. Don’t say anything on camera that would make it hard to keep your job (lol, that’s rich coming from me).

And if you still fall for it? Sue him, collect your settlement, and move on with your life.

Yes, he (and we) are having fun at your expense. But that has been the entire conceit for ALL of Sacha Baron Cohen’s characters since Da Ali G Show aired in 2000. FOR TWENTY YEARS we’ve watched as he has hoodwinked everyone from chicken farmers to gay conversion therapists. For the vast majority of that time, it was hilarious. Yet now, somehow, the tables have turned and we feel bad for these people? Good God world, how far we have fallen.

In sum, let’s all try to be more like Jeanise Jones. Or Kazakhstan, who, after years of pushing back, finally decided to lean in and embrace being the butt of the joke. Well done, glorious nation of Kazakhstan.