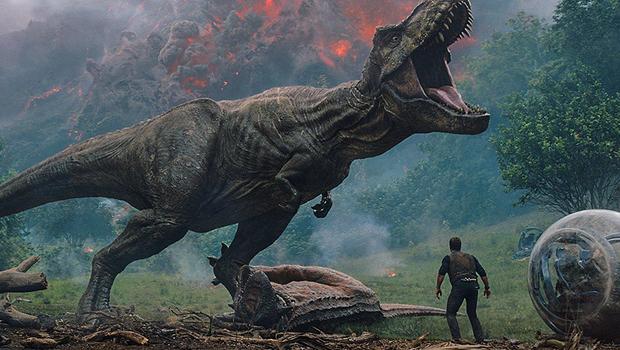 The dinosaurs are back! And so is Dr. Ian Malcolm in the first official trailer for Jurassic World: Fallen Kingdom. The exciting and action-packed new trailer debuted during Thursday Night Football and the dinosaurs really need our help.

In the sequel to the box office blockbuster Jurassic World, the dinosaurs are facing another extinction level event, this time an explosive volcano on the island of Isla Nublar. The trailer, which has nearly nine million views already, shows a variety of dinosaurs and people trying to escape the blistering wrath of the fiery eruption. Of the human being variety running away are Owen Grady played by Chris Pratt and Claire Dearing played by Bryce Dallas Howard. Owen gets reunited with a young velociraptor named “Blue,” but it doesn’t get the welcome he was hoping for.

Jeff Goldblum returns as Dr. Ian Malcolm from the original Jurassic Park to warn U.S. politicians that “life, uh, finds a way.” “These creatures were here before us,” Goldblum says in the new trailer. “And if we’re not careful, they’re gonna be here after us.”