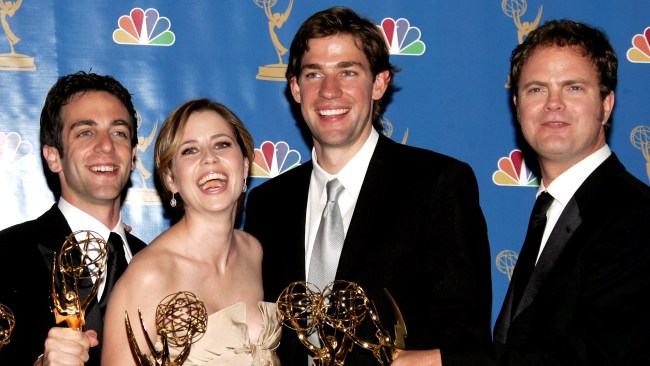 As we mentioned back in August, Jenna Fischer and Angela Kinsey were starting a new podcast called Office Ladies where they, and the occasional guest, discuss, dissect and share behind the scene stories of various episodes of The Office.

Real life best friends Fischer, who played Pam Beesly, and Kinsey, who played Angela Martin, watch one episode of The Office each week and the latest episode the ladies covered was first episode of the second season titled “The Dundies.”

As fans of The Office will recall, “The Dundies” is the episode where Pam has a little too much to drink, figuring that she would once again be receiving the “World’s Longest Engagement” award from Michael as she has her fiance Roy keeps putting off getting married.

Instead, Michael surprises her and awards her the title of “Whitest Sneakers” which makes Pam very happy. So happy in fact that she forgets herself and plants a kiss right on Jim’s lips.

This moment is what Fischer believes is Pam and Jim’s first kiss. John Krasinski, however, disagrees.

“I did not consider this their first kiss,” Fischer says during the podcast.

Kinsey sided with Krasinski on this one. “I did! I disagree! You planted one on him,” said Angela.

“The intention was that it was accidental. The intention was that Pam was going for his cheek, and it was one of those moments where he moved his head in a way that I wasn’t expecting and I’m drunk, and I just followed through,” Fischer continued. “That was what was in my head as Pam, so I wasn’t thinking that I was intending to kiss his lips. And so Pam kind of doesn’t register it. That was me. John said that Jim, who is not drunk, was very aware that they just kissed on the lips and this was a whole conversation that we had off-camera.”

“I agree with him though. I see both sides,” replied Kinsey. “I see, as a drunk person, you just kind of hug and you’re a little bit sloppy, but I see for him as a sober person this person he’s in love with just kissed him.”

Where do you fall on this very important debate regarding Pam and Jim?

One of these is a real kiss. pic.twitter.com/Hx93wl3wm9