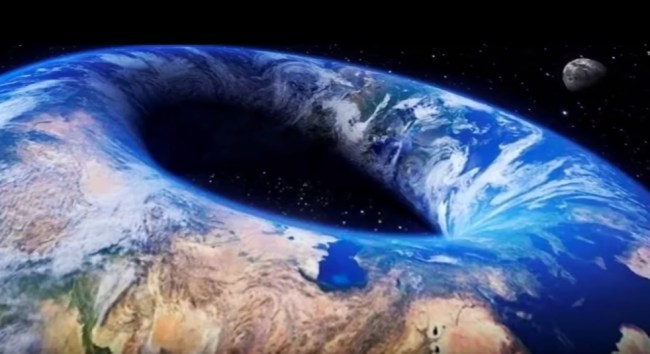 Old and busted: The Earth is flat. New hotness: The Earth is shaped like a donut. A group led by a former Flat Earther has popularized a conspiracy theory that the Earth is not flat, is not a sphere, but it actually is donut-shaped. Flat Earthers hold my beer, Donut Earthers are here to dispute proven science.

In 2012, a Flat Earther who goes by the handle of Varaug, posted in the forum of the Flat Earth Society website and proposed the idea that the Earth is shaped like a cruller. Well on the bright side, at least we are slowly moving towards a shape that actually resembles Earth. Is the “time to make the doughnuts” Dunkin Donuts guy God? Did he create Earth?

So why can’t we see that giant donut hole in the middle of planet Krispy Kreme? There’s a simple reason for that Varaug explains, “Light bends and follows the curvature of the torus (donut-shaped), making the hole ‘unseeable.’” Weird how the light doesn’t bend when looking at the spherical Earth from the International Space Station.

Flat Earthers now believe that the planet is shaped like a donut… pic.twitter.com/AON8jIqrk2

Despite the Moon, Mars, and the Sun not being donut-shaped, it hasn’t stopped donut Earth truthers from defending their delicious theory. However, there seems to be a massive hole in this new theory. Io9 contacted Oxford professor Dr. Anders Sandberg and he completely debunked the donut theory with a variety of scientific reasons such as gravity, seasons, clouds, and weather. Are hungry people amateur astrologists? The Moon is made of cheese and the Earth is a donut.

Astrologist Dr. Tabetha Boyajian and Tyler Ellis, a graduate student assisting Dr. Boyajian, informed Vice that the donut hypothesis doesn’t pass Foucault’s Pendulum test, “which shows the physical effects of the Earth’s rotation, the rate of which is consistent with a spherical, rotating planet.” I for one welcome the new theory that Earth is shaped like a giant inflatable swan pool float.

Are people just inventing stupid shit out of thin air just to troll everyone and get attention? Or in a society that eats Tide Pods, should this type of “logic” be expected? I don’t know about you, but I’m still a big fan of the theory that the Earth is flat and is being held up by four humungous elephants on the back of a giant tortoise swimming through space.

Stop the #FlatEarth @bobatl hate! The world is a disc held by 4 elephants standing on Great A'Tuin's shell. #Truth pic.twitter.com/IitLNGAnM4