The Guy Who Went Viral Skateboarding To Fleetwood Mac Has Received Over $20,000 In Donations And Has An Awesome Backstory 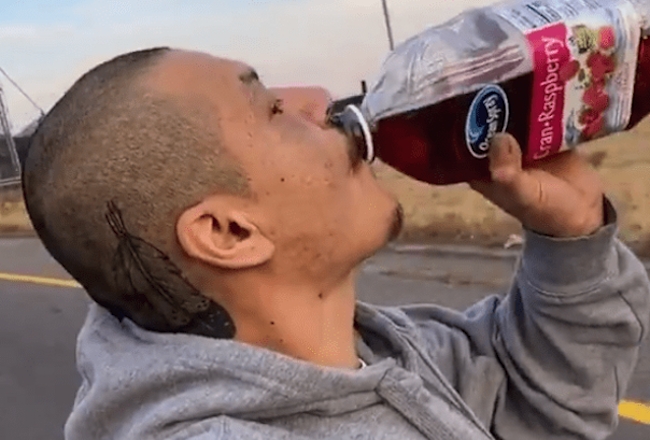 Over the course of the decade-plus span where social media has slowly but surely contributed to the downfall of society, it’s propelled a number of online celebrities into the public eye who have taken great strides in doing what they can to make the world an actively worse place to inhabit.

There are plenty of figures like Jake Paul who exists on the “Detestable” end of the “Famous Internet People” spectrum, but thankfully, there are a number of others on the opposite one who do what they can to cancel out the damage they cause—including one man from Idaho who recently made the world a slightly better place with the help of a skateboard, a bottle of Ocean Spray, and some classic Fleetwood Mac.

Earlier this year, I realized I’d become too washed to figure out how to properly navigate TikTok but the same can’t be said for 37-year-old Nathan Apodaca, who told The Post Register he joined the platform almost three years ago under the name “420Doggface208,” where he’d managed to rack up over 130,000 followers as of this April by harnessing the various trends that routinely take the platform by storm.

He managed to start one of his own a couple of weeks ago courtesy of a clip of him leisurely rolling down the road taking an occasional sip of cran-raspberry juice while the band’s “Dreams” played in the background, which the person on Twitter who exposed me to the clip in the first place described as the essence of a “vibe.”

After the clip went viral, plenty of other people decided to make their own version—including Mick Fleetwood himself, who made an account to specifically pay tribute to the man responsible for the spike in listens “Dreams” has received on various streaming services as people who were previously almost exclusively exposed to it by parents who insist on listening to classic rock while driving were turned on to the band in a less traditional way.

If you’re familiar with other people who’ve become famous virtually overnight thanks to the power of social media, you’re likely familiar with the phenomenon dubbed “Milkshake Duck,” a term coined by Australian Twitter Master Ben Ward in 2016 to describe the frequent occasions where the world falls in love with a regular person catapulted into the spotlight before someone digs up some skeletons from their past (as was the case with presidential debate sensation Ken Bone).

The whole internet loves Milkshake Duck, a lovely duck that drinks milkshakes! *5 seconds later* We regret to inform you the duck is racist

However, Apodaca managed to avoid that fate (at least of this writing), as all signs point to him being an incredibly down-to-earth, wholesome, and hard-working dude. The video in question was actually the result of his truck (which has over 300,000 miles on it) breaking down while he was on his way to the potato factory he works at, which resulted in him grabbing his skateboard to finish the last mile of his commute and deciding to film the clip en route.

He almost didn’t upload it, as he was putting the finishing touches on things while waiting to clock in but it’s safe to say he’s glad he did, as he didn’t only receive millions of views but over $20,000 in donations, $5,000 of which he gave to his mom and dad, who he described as Fleetwood Mac “fanatics” who turned him onto the band in the first place.

Apodaca is still living in a trailer in his brother’s front yard (he has to use his sibling’s house whenever he needs running water) but says a real estate agent has reached out to offer to help him put a down payment on a house for him and his family. He’s hinted Ocean Spray has reached out to him about a potential collaboration, and while he’s taken some time off from his primary job, he says he plans to return to the processing plant when his life eventually gets backs to normal.

In a year where feel-good stories are few and far between, I’d like to extend my sincere gratitude to Apodaca for giving us all what we need right now.