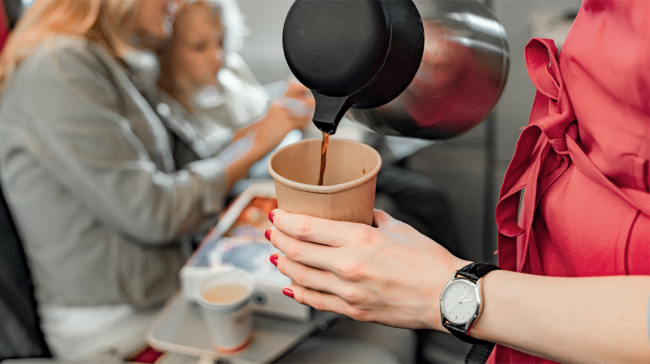 Everyone is on TikTok these days with some sort of tip, hack, piece of advice or wild story.

One of the more popular niches on TikTok is flight attendants and other airline workers sharing all their ugly (and occasionally helpful) secrets about the world of flying.

Among those popular flying TikTok accounts is a flight attendant who goes by the name Cierra Mist and has 3.1 million followers on the social media platform.

Ms. Mist has repeatedly gone viral for her many videos explaining the various aspects of her job as an air hostess.

Her most recent viral video, which has been viewed over 7.8 million times now, is called “Secrets about pilots and flight attendants.” In it, she reveals why she and the rest of her crew members never drinks the tea or coffee on a plane.

“Unless we’re super desperate, we will not drink the coffee or tea that’s supplied on the plane,” she states.

“The water that we used for the coffee and the tea come from the same spot – and guess what? It never gets cleaned.

“And while the airline may tell passengers that they do regular water quality tests, we’re told that’s it about six to nine months for even one test on one plane to happen.

“They’re not going to clean out that tank unless they find something.”

Another behind the scenes secret she shared is the fact that they are always wearing sunscreen when they work because they fly around so close to the ozone layer all the time.

“In fact, we’re so exposed to radiation that health insurance will label us the same as an astronaut or a radiologist,” she claims. [Note: I’m pretty sure she is referring to ultraviolet radiation, as opposed to the radiation you get from an x-ray which is electromagnetic radiation.]

flying soon? listen up and thank me later 💙 see you in the sky! ✈️

yes.. you may have to sit next to a 💀 body on your flight ✈️