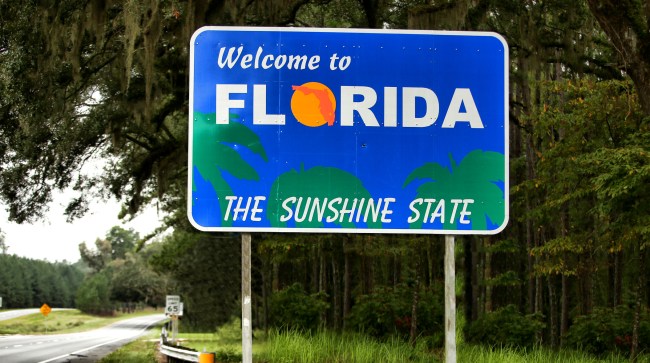 Good grief, Florida, what is wrong with you?

You’ve got anti-maskers marching around Target stores shouting “take it off!” Football fans completely ignoring social distancing protocols (despite the state being by far the most affected by the pandemic). Women beating up their dads for farting too much. People hanging off the front windshield of trucks speeding down the highway. And now you can’t even put up a welcome sign in the correct city?

Protip: just because a sign says “Welcome to Dania Beach” on it does not mean that it’s okay to install it on Dania Beach Boulevard… in Hollywood, Florida!

Because that’s exactly what happened, as the South Florida Sun-Sentinel reports…

Clive Taylor, a sharp-eyed Hollywood activist, noticed the eye-popping sign this week and quickly alerted City Hall. Soon, Hollywood’s city manager was on the phone with the city manager in Dania Beach.

“The older signs were not as bright and vibrant so people didn’t even know they were there,” Dania Beach Mayor Lori Lewellen said. “And now the new signs are going up and they’re getting noticed.”

Not sure how “sharp-eyed” one has to be to notice a welcome sign for a city that is located in the wrong city, but we’ll let him have his props.

“The little sign was bad enough,” said Taylor, vice president of the Hollywood Historical Society. “It should have never been there in the first place. But to have Dania put up this mini-billboard with lights on it is wrong. It says ‘Welcome to Dania Beach’ and you’re not even in Dania Beach.”

But wait… here comes the most Florida part of the story. The Sun-Sentinel actually wrote, “the two cities are in talks about whether the welcome sign should be moved.”

They’re in talks about it? Just move the damn sign!

“When you drive through you might think it’s Dania, but it’s actually Hollywood,” said Hollywood Mayor Josh Levy. “I think we’ll work together to find a way to celebrate both cities. I’m not looking to make a spat about it. We’re friendly with Dania Beach. We’ll resolve it.”