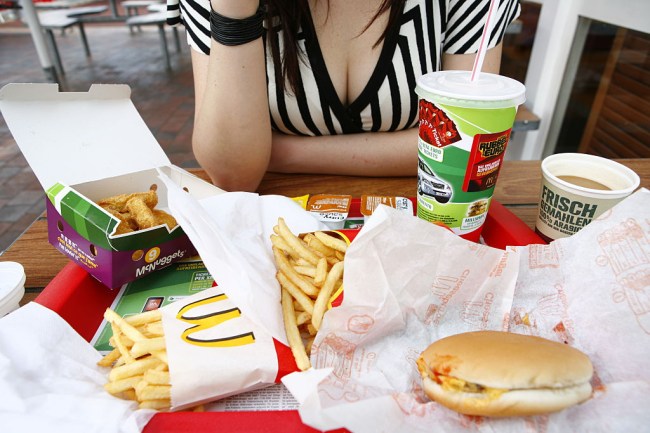 You order your double cheeseburger and a 20-piece Chicken McNuggets after overindulging in Wild Turkey, your friend starts to drive the car out of the drive-thru, and you quickly realize that you have not been given sufficient dipping sauces for a meal of that magnitude. You ask for an extra sauce, and the employee pulls that nonsense that it costs $0.25 for additional sauce packets. What do you do? What do you do? You get your dipping sauces by any means necessary, according to this Florida woman.

One young woman ushered in 2020 with a festive feast at McDonald’s. Maguire Marie McLaughlin was celebrating the New Year at the McDonald’s in Vero Beach, Florida. However, things took a turn for the worse when she could not get the dipping sauce that she so desperately desired.

According to the Indian River County Sheriffs’ office, McLaughlin ordered her food but did not receive the extra dipping sauce that she requested. The employee informed the 19-year-old Florida woman that it would cost a quarter for another sauce packet. That did not sit well with Miss McLaughlin.

At around 4 a.m., police were called, and McLaughlin was arrested for disorderly conduct, and arresting officers also said they smelled alcohol on her breath. The Florida woman had to be placed into mechanical restraints by the cops because she kept “locking her legs, refusing to walk forward,” according to the report. Never underestimate a woman who is hangry.

She was eventually brought to the Indian River County Jail for processing and was released later that day after posting bond. She was arrested for McDonald’s dipping sauce and it wasn’t even that rare tangy Mulan Szechuan sauce from the 1990s that Rick and Morty made famous and people were literally trading for cars. Also, it doesn’t sound like she ever got her dipping sauce.

NOT LOVIN’ IT: A Florida woman was arrested after allegedly threatening McDonald’s employees when she didn’t get the dipping sauces she wanted with her meal, police said. https://t.co/f34fyyvIJV

First off, McDonald’s employees need to come to the realization that their sauce packets do not contain platinum and diamonds inside. Most of those sauces are made with a combination of high fructose corn syrup, vinegar, sugar, cornstarch, and/or tomato paste. You ain’t Ray Kroc, you’re not getting a bonus for charging $0.25 for a dipping sauce. If someone wants one extra dipping sauce, happily give it to them, especially if they are chemically imbalanced and threaten to burn your establishment to the ground.

So now the question is which McDonald’s sauce is worth going to jail over? While a reasonable person would answer “none,” imagine that you are having an extreme case of the munchies or are attempting to avoid a hangover after too many Popov Vodka sodas. You have your chicken nuggs, but they’re dry as hell because you have no sauce.

Are you threatening to obliterate a McDonald’s over creamy ranch sauce? Probably not. Are you promising to commit arson on your local Mickey D’s over a packet of spicy buffalo? No, because you have Frank’s RedHot at home. Are you going to start learning how to build pipe bombs in your garage because they didn’t give you honey mustard sauce? Not worth it. The only sauce you might consider going to jail over is McDonald’s sweet n’ sour sauce. You can’t make homemade sweet and sour sauce at home? You don’t have apricot preserves in your fridge. This solves the mystery of the missing dipping sauce.