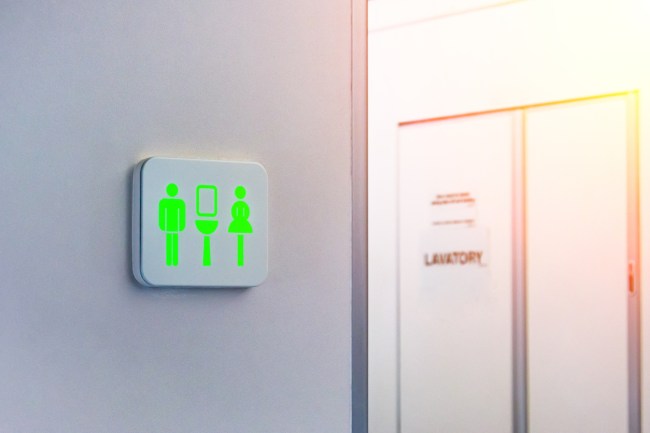 A 20-year-old British woman allegedly got so intoxicated on a flight that she asked male passengers to join the “mile high club” with her and attacked crew members by headbutting and biting them. Well, this certainly sounds like more engrossing inflight entertainment than watching Grown Ups 2.

Demi Burton was flying on an eight-hour Etihad Airways flight from Abu Dhabi, United Arab Emirates, to Manchester, England, on May 9, 2019. According to court documents released this week, the 20-year-old got uncontrollably drunk in what witnesses called a “four-hour rampage.”

Burton claimed that her intense fear of flying caused her to imbibe in so much alcohol that she invited men to join the mile high club with her in the plane’s bathroom. Burton “shocked two men by making crude comments about them having mid-air sex,” according to the Manchester Evening News. She seems nice.

“It appears she was drunk before getting on the flight and she started making a number of inappropriate sexual comments to a number of male passengers on the flight,” prosecuting attorney Claire Brocklebank said, The Telegraph reported. “Two [passengers] in particular remember hearing comments, and at first they laughed it off, but it then became more and more increasingly inappropriate, and she asked them to join the mile-high club.”

“Both tried to end conversation with her, but she carried on,” Brocklebank added. “One said he felt quite shocked by her comments, and people around her started to ask her to be quiet as others could hear.” An eight-hour flight can be boring, how many games of solitaire can you play in the headrest in front of you before you seek other avenues of entertainment?

Burton continued to chug red wine up until the cabin crew determined that she was too intoxicated and refused to serve her any more alcohol. One flight attendant cut off Burton from any more drinks, so she then asked another member of the cabin crew, who served her two red wines. This is the rock-solid logic of when your mom says, “no,” ask your dad.

However, 10 minutes later, Burton was allegedly demanding more alcohol by shouting at the cabin crew. She was finally cut off. That didn’t go well, to say the least. Passengers said the 20-year-old went “berserk.”

When the flight staff attempted to restrain Burton. Nevertheless, she persisted. She reportedly headbutted people severely enough to bruise them. The intoxicated passenger then bit two people, one airline steward and an anesthesiologist who said Burton’s behavior was “worse than anything he’d seen” in the emergency room.

It took six people to finally restrain Burton. Once the Etihad Airways plane landed in the U.K., Burton was arrested and hit with five charges of assault.

Burton’s lawyer argued that her drinking and outbursts at 30,000-feet in the air was caused by “stress.” “She is thoroughly ashamed of herself and because she is remorseful, she is utterly embarrassed at the way she behaved,” said Martin Callery. “It is completely out of character as far as she is concerned.”

Judge John Edwards said Burton’s behavior was “unpleasant, violent and persistent over a lengthy period” and could have been dangerous to everyone on the flight.

“Good order on any flight – in particular a long-distance one – is essential, and those who undermine that put that at risk by behaving in such crass way,” Edwards told Demi during the court proceedings. “I’m afraid you have to be dealt with in a way that might deter others.”

Burton, who was traveling from Australia to England, was sentenced to six months in jail. #FreeDemiBurton