Woman Kicked Off Spirit Flight, But Not Before Twerking In A Skirt And Challenging Another Passenger To A Fight 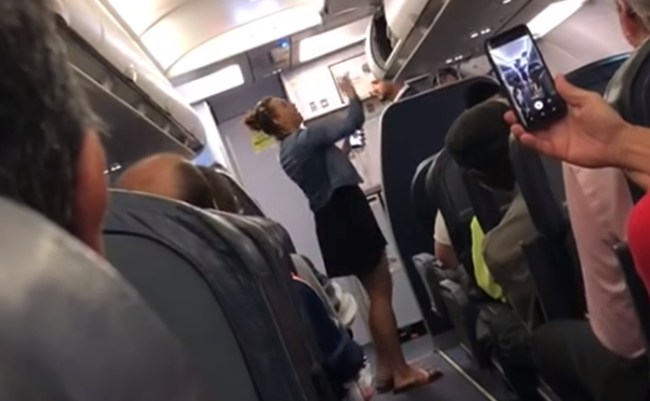 Going home from Spring Break can be tough, no doubt about it. The booze-filled days where you start drinking Don Julio with your pancakes at 9 a.m. is a welcome diversion from your normal hustle and grind. But alas, all good things must come to an end. This woman may have felt the pressures of returning to her normal everyday 9-5 slog and didn’t want to leave Orlando, Florida to go back to New Jersey.

Passengers aboard the Spirit Airlines flight from Orlando to Newark, NJ, were privy to quite the pre-departure spectacle. A young woman was kicked off the Spirit flight, The reason why, man, I don’t know.

You could guess that perhaps the flight staff believed the rowdy passenger’s blood alcohol level was too high for air travel. We have no proof of that, but that could be a possible conclusion that some may come to. But she must have done something worthy of being booted because half the plane was recording the woman and expecting her to do something outlandish. Narrator: They were correct.

After being asked to leave the airplane, the woman responded by encouraging her fellow passengers to record her departure. She screamed, “Record all you f*ck want!” Then the woman has an odd reaction to being forced off a plane — she begins to twerk. The woman is twerking in a short skirt, giving the rest of the plane a direct view inside her cockpit.

But the fun twerking quickly soured after another female passenger screamed, “So proud to be trashy, I love it!” The unruly woman responded by challenging her to a fight. “Yeah! Come fight me then b*tch! Do something! Do something! Oh nothing ‘cuz you’re a p*ssy ass!” She yells, “You’re not my mother! My mother makes more money than you!” Well, if your mother makes so much money then why are you flying Spirit?

Eventually, the twerking, fighting woman is escorted off of the flight. But before she leaves the plane she is an appropriate sendoff as her once fellow passengers clap with happiness at her departure and serenaded he Steam’s 1969 classic Na Na Hey Hey Kiss Him Good Bye. Looks like Spring Break will continue for a little longer for this woman even if it is at the Chili’s bar in the Orlando International Airport.