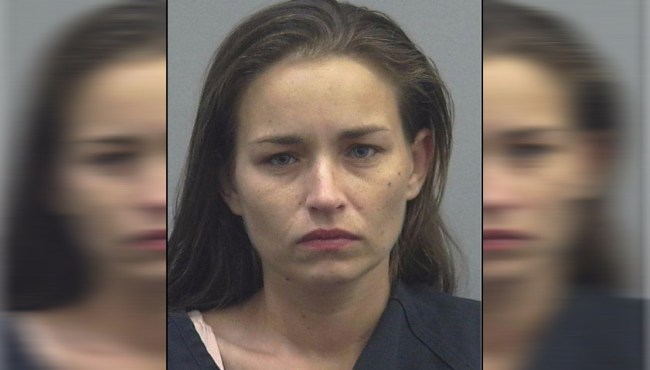 Week after week it seems like Florida Man is getting into some kind of trouble for his misbehavior, so it’s about damn time Florida Woman gets herself a little attention.

Today’s Florida Woman is Mary Liane Fritz, 30, who was arrested by High Springs police on charges of stalking.

According to an arrest report obtained by Gainesville.com, Fritz followed a woman who claimed she was being stalked to the High Springs Police Station on Monday afternoon.

For some reason, despite already being at the police station, officers handcuffed Fritz’s hands behind her back and placed her in the back seat of a patrol car… alone. Big mistake.

The arrest report states Fritz then somehow got out of her cuffs, climbed through the partition in the vehicle to the front seat, STARTED THE CAR (WHY WERE THE KEYS IN THE CAR?), and drove off!

Sadly, her getaway turned out to be short-lived.

Police used GPS tracking to follow the police car after Fritz rammed it into the automatic gate at the station and left Alachua County, the report said.

High Springs police charged Fritz with grand theft of a vehicle, stalking and criminal mischief and with probation violation for making violent contact with the woman.

Fritz ended up being booked at the Alachua County jail (ah, that’s where they were going to take her), where she remained, at least as of Tuesday, with a bond of $95,000.

No video of Fritz’s magical escape is available yet, but there’s a pretty good bet it looked a little something like this…