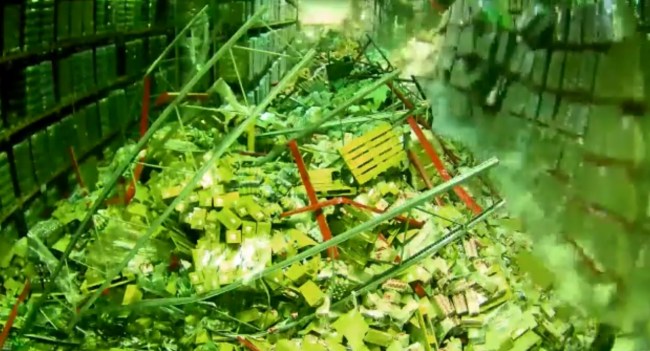 Did you screw up at work this week? Maybe you forgot to put a coversheet on your TPS reports, which is bad, but nothing that can’t be quickly remedied. Whatever your minor faux pas was at work this week you can take solace that you didn’t have a work fail of monumental and potentially lethal proportions as this forklift driver who caused an entire warehouse to collapse.

This forklift driver literally brought the house down when they accidentally bumped into a rack. The extremely slight nudge by the forklift caused a massive chain reaction that crashed all of the warehouse shelving units to come down harder than someone after a 32-hour coke binge.

Cleanup in aisle two. And three. And four. And five. What is that rack made out of — wet toilet paper? The shelves really do come down like dominoes and just when you think the worst is over another entire row of shelves and products come crashing down.

RELATED: HOW THE F*CK DID THIS HAPPEN?!?!

The CCTV footage was reportedly from July of 2017 but went viral this week. So hopefully that means that nobody died from this crazy accident? Next time your boss said you made a collosol fuck-up, you can know in your heart that your mistake wasn’t nearly as devastating as destroying an entire warehouse and pretty much everything in it.

After further research, it appears that these types of racktastrophes do happen from time to time. Just a subtle touch by the forklift into the rack and they all come falling down.

Looks like forklift drivers should be paid more than $13.72 per hour because their job looks dangerous AF.