3,500 People In France Decided Dressing As Smurfs At A Massive Gathering Was More Important Than Avoiding The Coronavirus Pandemic 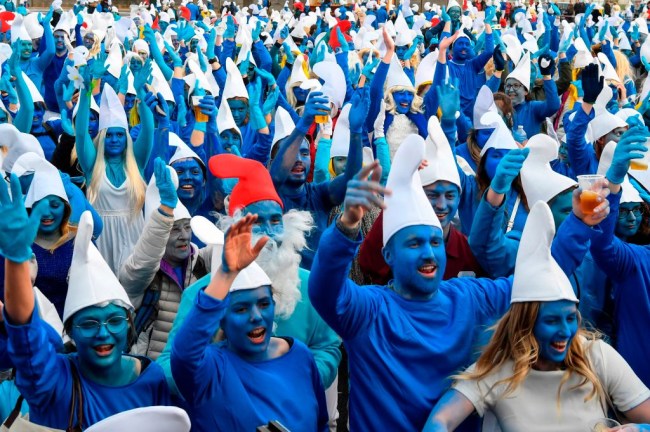 Over the past week or so, the world has officially caught coronavirus fever (including the more than 125,000 people who have dealt with the actual fever that comes with contracting COVID-19) and decision makers around the globe have scrambled to figure out ways to curb what the World Health Organization has officially dubbed a pandemic.

I was one of the many people who brushed off concerns as the illness slowly started to make its way around the world after first surfacing in China last year, and as a relatively healthy 20-something, I’m still not overly concerned with meeting my demise if I end up getting it.

Summary of best-estimate coronavirus fatality rates (from the preprint below):

With that said, I can certainly understand why many of the powers that be have declared a state of emergency and are preparing for a worst-case scenario, which is certainly understandable when one expert said a possible death toll of 480,000 people was a conservative estimate.

As a result, countries around the globe have turned to some fairly drastic measures and various sports leagues have been bearing the brunt of an increase in the number of policies banning large gatherings of people, which has impacted soccer teams in Italy in addition to the San Jose Sharks and the Golden State Warriors, who (along with the Nets) will become the first professional team in America to play a game without fans after San Francisco cracked down on the congregation of large crowds.

The Warriors, league sources say, will be directed to play host to the Nets on Thursday night at Chase Center in a game CLOSED to fans

As of this writing, almost 2,300 people in France have contracted coronavirus (48 of whom died) but the alarming statistics available were apparently not enough to stop over 3,500 people in the country from descending upon the village of Landerneau in an attempt to set the Guinness World Record for “Most People Dressed As Smurfs.”

VIDEO: Thousands gathered in France at the weekend to break the world record for the largest-ever gathering of Smurfs.

Around 3500 people set aside fears of the #coronavirus to dress up as the characters, which come from a Belgian comic franchise pic.twitter.com/G3tMFoTE6A

According to The Washington Post, prospective record-breakers covered in blue body paint and wearing outfits tied together with the signature white hats donned by the cartoon characters stood in close proximity to each other on Saturday, where they threw caution to the wind by dancing to music and grabbing each other to form conga lines.

Landerneau mayor Patrick Leclerc said he supported the event because he wants people to continue to live their lives as normal although all of the evidence at hand would suggest that’s not the best strategy. Someone else in attendance also claimed he wasn’t worried, saying, “There’s no risk, we’re Smurfs…We’re going to Smurferize the coronavirus.”

As The Post notes, on the day after the record-breaking attempt, France banned gatherings of more than 1,000 people, so it looks like they assembled just in the nick of time.

I wish all of these people the best of luck in not falling victim to the health equivalent of Gargamel.