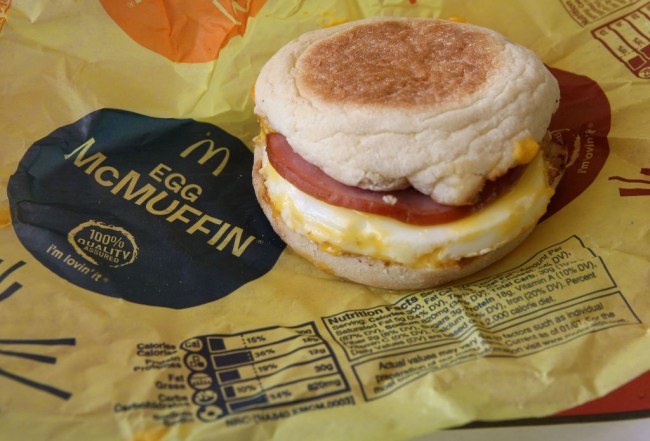 Everyone is entitled to their own food opinions (except people who actually believe New York City barbecue is good), but I would have to argue that breakfast is the best part of McDonald’s menu.

Their morning menu offers a fine line of various breakfast sandwiches at very reasonable prices. You go in, get your #2 (Sausage McMuffin with Egg) with a hashbrown and a Tropicana orange juice. Sometimes you run into one of those specials where it is two breakfast sandwiches for $3. But on Monday there will be an even more generous offering — free Egg McMuffins!

McDonald’s has proclaimed that Monday, March 2, is National McMuffin Day, and they are celebrating by giving you a free breakfast sandwich. McDonald’s Egg McMuffin turns 50-years-old next year (No word on whether you left one out for 50 years if it would get mold on it, such as this 6-year-old McDonald’s burger) and was introduced in 1971 by Herb Peterson, a McDonald’s owner and operator in Santa Barbara, California.

“While we’re giving the Egg McMuffin its moment, we’re really honoring our breakfast fans who have woken up with McDonald’s breakfast for nearly 50 years. And we just thought, ‘hey, why not declare March 2 as National Egg McMuffin Day?’,” said David Tovar, Vice President of U.S. Communications. “We’re always looking for new ways to show our fans love and remind them, no matter where they might be, a great-tasting and convenient breakfast is just around the corner for them at McDonald’s.”

If you go to a participating McDonald’s restaurant in the US on Monday between the hours of 6 am to 10:30 am local time, you can get a free Egg McMuffin. But you can’t just walk in and demand free food. You’ll need to order your Egg McMuffin from the McDonald’s app to get it for $Free.99.

McDonald’s has another reason to get people to their fast food joints, Wendy’s is getting into the fast food breakfast game also starting on March 2 nationwide. Wendy’s is going hard after morning customers, spending $80 million to promote their new breakfast offerings.

The fast food breakfast wars are getting fierce.