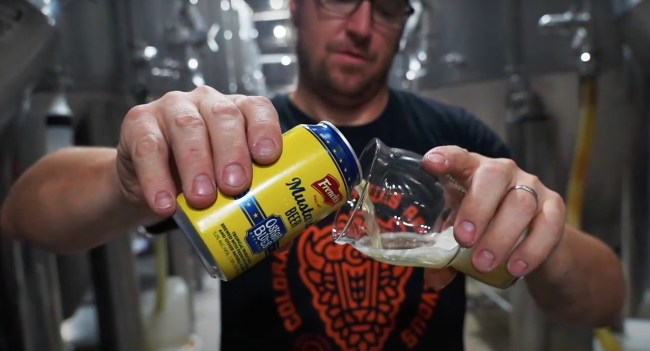 If there was a part of you thinking that 2020 couldn’t possibly get any weirder, man, let’s just say that you didn’t give it enough credit. So far, we’ve learned that all of those sci-fi contagion movies where the population is nearly rendered extinct are not far-fetched, not to mention that UFOs are real and, well, that probably means that aliens are too. But while the nation was busy looking around the madness trying to predict what might happen next, they had no freaking clue that it was the craft beer world engineering brewhouse concoctions using sandwich condiments.

It was revealed earlier this week that Colorado brewery Oskar Blues recently got together with the folks at French’s to create a wheat ale flavored with yellow mustard. Weird, right? Considering that marijuana is legal in the Centennial State, we presume this whacky idea was conjured up one night after company executives got stoned, drunk and then scarfed down their weight in hot dogs to combat the munchies. It’s the only reasonable explanation for creating a canned love child that we expect will taste as though it was conceived on top of a charcoal grill on the Fourth of July.

Craft beer aficionados might cringe at the thought of knocking back something that sounds like it is flavored with hot dog water. Yet, those people might actually be pleasantly surprised with the well-roundedness of French’s Mustard Beer, according to Oska Blues Head Brewer, Juice Drapeau. It’s more than just a condiment with an ABV of 5.2%. This tart, cider-esque brew comes with hits of key lime, lemon, tangerine and passion fruit, Drapeau says. It’s a perfect sip for cylindrical meats.

“We’re stoked on bold flavors at Oskar Blues Brewery and we never shy away from a challenge,” Drapeau said. “With French’s Mustard Beer we elevated the Classic Yellow Mustard flavor with tangy lemon and lime to create a tropical wheat ale I’d pair with a loaded hot dog on the hottest day of the year.”

Beer collaborations have become wildly popular over the past few years. We’ve seen a variety of oddball pairings like Yuengling Hershey’s Chocolate Porter, Elysian’s Rolling Stone Lager and Harpoon Dunkin’ Coffee Porter. To that end, nearly every heavy metal band that has been allowed to release a second album now has a beer as part of its merchandising repertoire. It seems that craft brewers are bored with churning out the same old batches time and again and, quite honestly, they are probably searching for unique solutions to help them stay afloat. A recent report from the Brewers Association states that 3,600 of the 8,000 brewhouses in the United States could be forced to close their doors due to this pesky virus. It’s a shocking revelation considering that Americans have been drinking a lot more in 2020 since, well, there hasn’t been much else to do. But reports also show that consumers are not snatching craft brews off the shelves anymore with the same enthusiasm. Instead, they are buying up cheaper domestics to balance the economic uncertainty of the times. It’s the survival of the fittest out there. Unfortunately, it’s the breweries with the deepest pockets that are most likely to make it out alive.

But diehard fans of craft beer are a different breed than the average beer-bellied consumer. The same snobs who’ll turn up their noses to all of the strange offerings coming out of brewhouses as of late are the same ones itching to give them a try. Whether the French’s Mustard Beer will get everyone’s wieners hard enough to come back for a second round remains to be seen. But we’ll find out soon enough. On Monday, August 1, French’s Mustard Beer can be purchased online through Craftshack or at any one of the Oskar Blues Brewery taprooms throughout Colorado. Just don’t be too upset if they smell like they’ve been bombed with mustard gas.