The ‘Galaxy Quest’ Revival Is Still In The Works 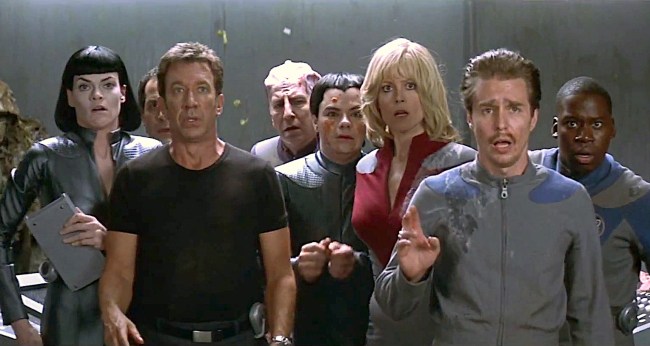 Does Gen Z know about Galaxy Quest or were we able to sneak that one past them? If they haven’t discovered it yet, let’s keep that one between us. You know, like Con-Air — our own little haven of 90’s peace.

Like all successful movies and/or television shows from the 90s, Hollywood has obviously tried to reboot Galaxy Quest in the years since. In fact, a few years back, a TV series at Amazon was in the work prior to Alan Rickman’s death.

Since Rickman’s untimely passing, the project has gone cold, but Sigourney Weaver recently sat down with Collider and revealed that the long-awaited revival is STILL in the works!

“They were in the middle of reviving it. First of all, there was another script. There was a sequel written by our writer, Bob Gordon. The movie was so witty, and when they released it, DreamWorks cut a lot of the wittiest scenes because they wanted to put it out as a children’s movie at Christmas. I think that was disappointing for everybody, so he decided not to let them have the second one. However, it was about four years ago, Bob and (producer) Mark Johnson and the whole group, started to develop a series. We lost the wonderful Alan [Rickman] unexpectedly, so that was put in mothballs, but I think they are finally now reviving it,” said Weaver. [via Collider]

While Weaver is unclear about whether the revival would be a TV series or a film, given the very Star Trekian nature of its concept, seeing these characters fleshed out in a series would be far more interesting.