“Game of Thrones” spoilers ahead. This is one heck of a “Game of Thrones” fan theory. This bananas hypothesis revolves around the fulfilled prophecy of the legendary Azor Ahai AKA the Prince (Or Princess) Who Was Promised. Cases for both Daenerys Targaryen and Jon Snow have been made to believe that they are to be the reincarnated savior of the R’hllor hero. This delicious fan theory suggests that Daenerys is Azor Ahai and she will have to make a gigantic sacrifice to save Westeros.

The Red Priestesses of the Lord of Light has been trying her darndest to help bring the great Azor Ahai back to life, despite not really knowing who is the great Azor Ahai. But the prophecy states that the fabled warrior is supposed to forge the most powerful sword in all of the Seven Kingdoms. The sword, which is called Lightbringer, will conquer the darkness, which is the Night King leading his army of White Walkers south.

The “Game of Thrones” Wiki explains the prophecy of Azor Ahai:

According to the prophecy, the Prince (or Princess) is destined to “lead the people against a darkness” — presumably the White Walkers — with a flaming sword called Lightbringer. “There will come a day after a long summer when the stars bleed and the cold breath of darkness falls heavy on the world,” it reads. “In this dread hour a warrior shall draw from the fire a burning sword. And that sword shall be Lightbringer, the Red Sword of Heroes, and he who clasps it shall be Azor Ahai come again, and the darkness shall flee before him.”

However, a weapon of this magnificent power must be forged, and all of this dominance comes with a price.

Redditor matttwee posted their exhilarating theory on the “Game of Thrones” Reddit on who Azor Ahai is and how that character will create the Lightbringer.

In Episode 2 of this season, we got the extremely heavy-handed “prince or princess that was promised” Valyrian grammar lesson, which was enough for some viewers to become convinced that Daenerys is Azor Ahai. I was not convinced.
Until Episode 3.

Let’s look at the two battles that involved Daenerys’ armies in each episode the past two weeks. The first, Yara/Dorne vs. Euron’s naval battle. Euron crushed their forces, taking their ships as well as Yara, Ellaria, and Tyene as prisoners. This attempt was a failure for Daenerys. The second, Unsullied vs. Casterly Rock. While Daenerys comes out with a victory in the battle itself, Cersei outsmarts her here. Only a fraction of the Lannister army is defeated, and Euron burned her fleet. The Unsullied have to march across Westeros to return to Dragonstone, where Lannister forces will most likely be waiting for them. Another failure for Daenerys.

The location of Daenerys’ failures is the key here. The first, in water. The second, Casterly Rock, the seat of House Lannister, whose sigil is a lion. And if we’re thinking figuratively you could say Casterly Rock is the heart of the lion.

If these battles represent any sort of pattern, it is pointing to the fact that Daenerys Targaryen is Azor Ahai. We don’t know yet who will be standing in for the third part of the prophecy, Azor Ahai’s lover, but I’d be willing to guess that it is Jorah Mormont. He’s been cured of grayscale, and is heading back to Daenerys, it seems logical. The only thing I’m still unsure of is what or who exactly Lightbringer will be for Daenerys. It seems to be some sort of army, maybe involving dragons, but who knows.

Jorah Mormont told Samwell Tarly that he was going on a journey to reunite with his queen. But before he had grayscale, Daenerys was ready to kill Jorah for betraying her before Tyrion Lannister talked her out of it and got his sentence reduced to be being banished from Meereen. While Jorah is in love with Daenerys, the Queen of Dragons doesn’t seem to have the same feelings for him and has put him in the friend zone for six seasons now. It wouldn’t be such a big sacrifice for Danerys to kill Jorah to save the Seven Kingdoms.

A second theory is that in order to create the Lightbringer sword the Queen of Dragons will have to kill her favorite child, Drogon. Now this would be a huge sacrifice for Dany. It also makes sense as far as the prophecy goes because Daenerys doesn’t have a spouse, but Drogon is named after her late husband Khal Drogo.

Drogon is the biggest of the three dragons, far larger than Viserion and Rhaegal. “The dragons this year are the size of 747s,” “Game of Thrones” director Matt Shakman said. “Drogon is the biggest of the bunch — his flame is 30-feet in diameter!” But how will Dany exterminate her beloved Drogon who is the size of an airplane? Maybe use Maester Qyburn’s ginormous ballista to take out her own child? 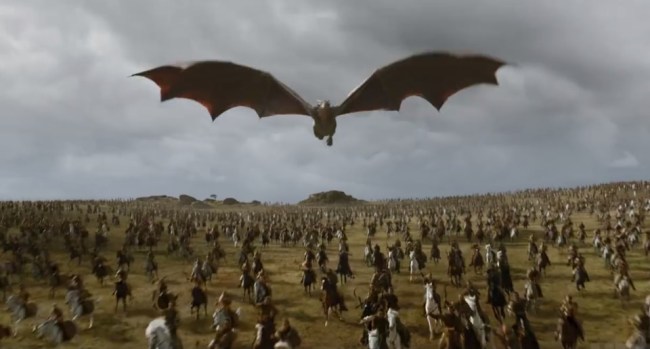