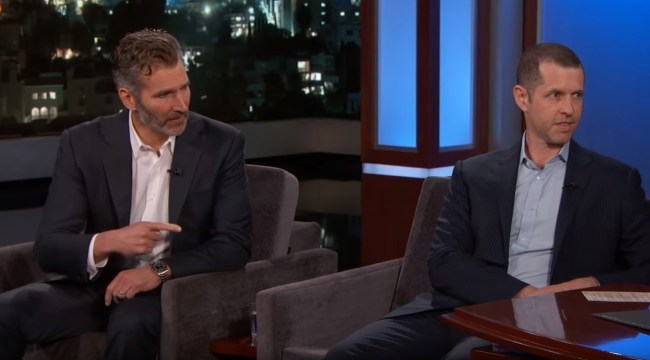 Game of Thrones fans are still reeling or celebrating the Battle of Winterfell from Sunday’s The Long Night episode. David Benioff and D.B Weiss appeared on Jimmy Kimmel Live! to (try) answer all of your burning questions regarding the final three episodes of Game of Thrones and who will ultimately sit on the Iron Throne. But they really didn’t answer anything, but they did share some interesting stories about the creation of Game of Thrones.

Benioff and Weiss first met each other at graduate school in Dublin, Ireland. Benioff first read the Game of Thrones books, A Song of Ice and Fire, and it only took about 200 pages for him to get obsessed with the book and told Weiss about ASOIAF. Weiss told his writing partner, “you need to check out these books, cuz I might be crazy but these might make for the greatest series of all-time.” Weiss finished the book in TWO days because he didn’t move and didn’t shower.

Benioff and Weiss then met with George R.R. Martin for a four-hour lunch. Martin, with a little bit of butter in his beard, asked Benioff and Weiss one question: “Who is Jon Snow’s mother?” They answered the question correctly and they made a deal to bring the books to TV.

Benioff and Weiss then pitched the show to HBO and eventually it was picked up. The pilot was not run by HBO because the showrunners “made every possible mistake” because they “had never done this before.” The pilot was exceptionally bad and you can read how bad it is HERE.

RELATED: Kit Harington: ‘Episode 4 Is One Of My Favorites,’ Emilia Clarke: Episode 5 Is ‘Even Bigger’ Than Battle Of Winterfell

Benioff and Weiss said many of the actors struggled with learning the fake language and proper pronunciation, but according to Game of Thrones language creator David J. Peterson, he said one actor excelled at speaking Dothraki. Jacob Anderson who plays Grey Worm the commander of the Unsullied, the eunuch soldiers of Astapor, is the best at speaking the fictional language of the nomadic horse-mounted warriors from Essos.

Then Benioff and Weiss took questions from Jimmy Kimmel and when I say they took questions, that doesn’t mean that they actually answered the questions. When asked: “Have we seen the last of the White Walkers?” the showrunners replied with the useless answer of: “Yeah, we’re not going to answer that.”

When asked: “Did Bran know that Arya was going to kill the Night King?” They answered: “Possibly.” Finally, they were asked: “Will someone take the Iron Throne?” and it was given the response of: “Possibly.”

When asked how they inform actors that they are going to be killed off they said that they make a “death call” before they get the script. Looks like we’ll have to tune in on Sunday to see what happens next in Westeros.

Benioff and Weiss have appeared on Jimmy Kimmel Live! in the past with this funny apology for Hodor’s demise and the reprecussions that have followed.