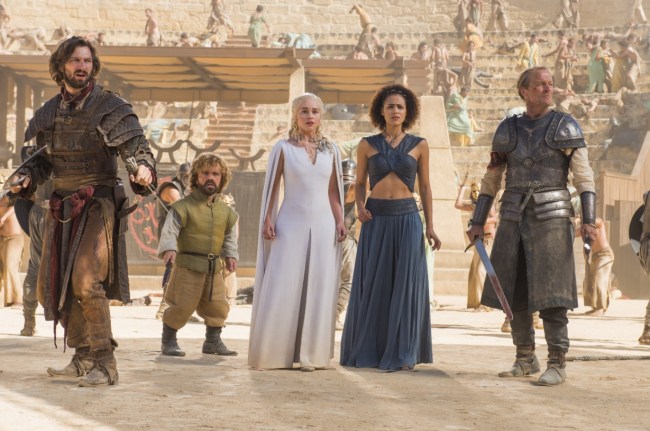 Somehow a remarkable amount of the main characters survived Season 8 to see the Game of Thrones finale despite two wars (one that included a zombie army) and two bloody political coup d’états. This is rather surprising for a TV show that made its reputation by making you fall in love with characters only to murder them in brutal and shocking ways just when they seemed most integral to the plot. One of the Game of Thrones writers is giving an interesting nugget of information about how one character was supposed to live until the finale but they ended up killing them off a few episodes earlier.

Dave Hill is a Game of Thrones writer and the assistant for the showrunners David Benioff and Dan Weiss. Hill helped write some important episodes such as Sons of the Harpy, Home, Eastwatch and Winterfell. Hill was made a writer on the show after coming up with the idea that the character Olly should be Ygritte’s killer.

“We had an assistant named Dave Hill,” said Benioff and Weiss told Variety in 2014. “One day last summer he walked into our office and said, ‘You know that kid (Olly) whose family gets massacred by the wildlings? The one who runs to Castle Black to let them know the wildlings are nearby?’ ‘Yeah?’ ‘Well,’ said Dave, doesn’t it make sense that he’d stay at Castle Black and become a Night’s Watch recruit? Where else is he going to go?’ ‘You’re right,’ we said. ‘That does make sense.’ ‘And what if during the battle for Castle Black, he’s the one who ends up killing Ygritte?’ This year, Dave Hill is a writer on the show.”

Now Dave Hill comes forward to tell Entertainment Weekly about how one character was supposed to ride off into the icy white sunset with Jon Snow (Kit Harington), but in the end, the writers couldn’t resist killing off this one character.

“For a long time we wanted Ser Jorah to be there at The Wall in the end,” Hill says. “The three coming out of the tunnel would be Jon and Jorah and Tormund. But the amount to logic we’d have to bend to get Jorah up to The Wall and get him to leave Dany’s side right before [the events in the finale] … there’s no way to do that blithely. And Jorah should have the noble death he craves defending the woman he loves.”

Having Ser Jorah Mormont (Iain Glen) defend his one true love by sacrificing his life for Daenerys Targaryen (Emilia Clarke) is really the ending that he needed. Jorah made it close to the end of Thrones, ultimately dying in the Battle of Winterfell in Episode 3 of Season 8 titled The Long Night. Jorah posthumously starred in Episode 4 of Season 8 titled The Last of the Starks. But in the end, Jorah died doing what he loved, being friendzoned by Dany.

It would have been interesting to see if Jorah’s infatuation with Dany disappeared after seeing her kill innocent people and burn King’s Landing to the ground. Who are we kidding, of course Jorah would have still had the hots for his Khaleesi.

ET asked Ser Jorah Mormont actor Iain Glen how his GoT character would have responded to the Mad Queen.

“There’s a sweetness in that because Jorah will never know what she did,” Glen says. “That’s probably best. It’s a blessing for him that he never found out what happened to her. And from a pragmatic story point of view, his death served a greater purpose. Where could we have taken Jorah from there? F*ck if I know.”