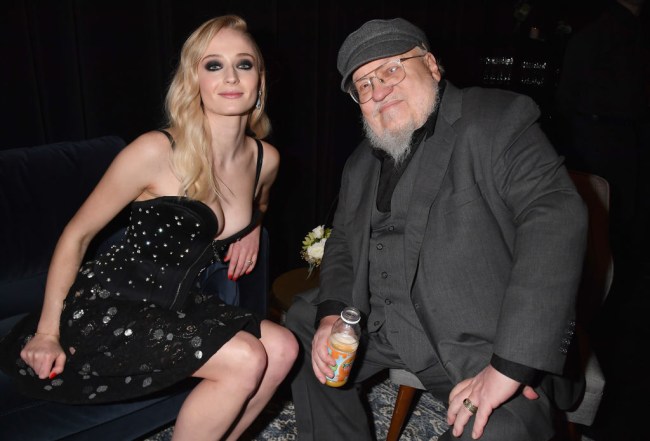 George R.R. Martin is busy writing the sixth volume in his A Song of Ice and Fire series, The Winds of Winter. While we really don’t know when the newest ASOIF book will be released, the Game of Thrones author did provide some insight into the positives and negatives of his novels being turned into a high-production TV series for HBO.

Martin said one negative connotation of going from the books to a TV show is that so much great content has to be cut. The Game of Thrones storyline that Martin wished was in the TV show is Lady Stoneheart AKA zombie Catelyn Stark. Martin said things have to get cut our because his books are so thorough and long. “There’s hard choices sometimes, but that’s the business,” Martin said in an Entertainment Tonight interview at the 9:34-mark.

Martin also did another interview where he elaborated on the frustrations of taking the books and making them a TV series. In the interview with Fast Company, Martin laid out the difficulties with being true to the books as well as collaborating with a group of writers and network TV executives.

“I don’t mind being part of a team, but there’s something in me that wants to be the captain of the team,” Martin said. “When you’re writing short stories and novels, yes you may have editors and all that, but essentially the writer is king. The writer decides how everything is going to be; people can give suggestions, and you can say yes or no to them. Now, when you get involved in television and film, um… you’re working with a large team.”

“It’s hard enough to come up with a good story and good characters and things like that, but in television and film not only does the writer have to come up with that, but then he has to fight for it politically,” Martin said. “In some cases there’s butting heads and clashing egos and there’s debates.”

“It can also be traumatic because sometimes their creative vision and your creative vision don’t match, and you get the famous creative differences thing — that leads to a lot of conflict,” Martin said of his relationship with developing his books into TV shows.

“You get totally extraneous things like the studio or the network weighing in, and they have some particular thing that has nothing to do with story, but relates to, ‘Well this character has a very high Q Rating so let’s give him a lot more stuff to do even though he’s a rather unimportant character,'” Martin explained.

RELATED: ‘Game Of Thrones’ Showrunners Reveal How They Break The News To Actors That Their Character Has Been Killed Off

George R.R. Martin does not name the exact character who he says is unimportant, but when he is saying this, the video features a montage of Bronn. In the novels, Bronn was featured in several of the books including A Game of Thrones, A Clash of Kings, A Storm of Swords, and A Feast for Crows.

Bronn seems like a very important character, he’s a well-sought-out mercenary for hire, that can tilt the balance of power from one leader to another. Bronn is such a valuable fighter and sellsword that he is hired by Tyrion Lannister to be his personal bodyguard and then anoints him Commander of the City Watch in King’s Landing when Tyrion is made Hand of the King.

Bronn was rightfully awarded knighthood by King Joffrey Baratheon for his bravery exhibited during the Battle of the Blackwater. Ser Bronn of the Blackwater was hired by Jaime Lannister to go on a rescue mission to save Myrcella Baratheon from Oberyn Martell in Dorne.

Bronn helped the Lannisters win the Second Siege of Riverrun and capture of Highgarden. Bronn defends the Lannister convoy from a surprise attack by Daenerys Targaryen and her Dothraki, and became one of the few humans to take down a dragon from the sky.

Cersei Lannister paid Bronn a lot of gold so that he would go north and use the same crossbow that Tyrion used to kill his father Tywin Lannister to assassinate Jaime and Tyrion.

RELATED: Kit Harington: ‘Episode 4 Is One Of My Favorites,’ Emilia Clarke: Episode 5 Is ‘Even Bigger’ Than Battle Of Winterfell

Another reason that this doesn’t make sense is that nobody really talks about Bronn. When you talk about high Q Ratings of Game of Thrones characters who are beloved you think of Dany, Jon Snow, Arya Stark, Ned Stark, Tyrion, Oleanna Tyrell, Gendry, Ser Brienne of Tarth, Sansa Stark, Ser Davos, Missandei, Ser Pounce, Tormund Giantsbane, Hodor and most recently Lyannna Mormont.

It would seem that the one character who lacks any real substance and has been artificially elevated because they are solely a fan favorite is Lyanna Mormont. While you have seen other characters do years of intense training, experience horrific life events, learn from experts or read books to become powerful players in Westeros, Lyanna Mormont just kinda showed up one day, gave am icy stare and she was instantly declared a “queen.” Lyanna Mormont is only briefly in the A Dance with Dragons where she writes a letter to Stannis Baratheon.

Not to mention that she literally has no actual power. Lyanna is not the ruler of Bear Island. Lyanna’s mother Maege is the leader of House Mormont. Maege Mormont is a valiant warrior who wields a spiked mace and possibly even a bear-f*cker according to A Wiki of Fire and Ice.

Let’s say that Maege is dead, Lyanna still wouldn’t be in power of Bear Island because she has four older sisters. One of her sisters, Dacey Mormont, was killed during the Red Wedding when she was axed in the stomach by Ryman Frey. But there are still three older sisters with the rightful claim as leader of Bear Island.

Lyanna of House Bit Into A Lemon And Made A Sour Face doesn’t appear to have ever been tested in battle and showed it in the Battle of Winterfell. Let’s talk about Lyanna’s military tactics, running directly at a giant when you weigh 85 pounds soaking wet comes off more dumb than brave. However, the internet celebrated fearless girl Lyanna Mormont as the “greatest warrior Westeros has ever seen” and the “true Queen of the North.” Let me remind you, this is the same episode that Arya Stark slew the Night King by soaring from the free throw line.

🚨SPOILER ALERT: Stop watching if you don't want any spoilers 🚨

Lyanna Mormont will go down in history as the greatest warrior Westeros has ever seen. pic.twitter.com/DDIAb2IBKx

There was this tweet that said, “David got nothing on you, baby girl!” Actually, David has a lot on Lyanna Mormont, David killed Goliath, whereas Lyanna got squished to death in her quick-lived battle with the giant.

Lyanna taking down the giant wight. David got nothing on you, baby girl! #GameofThrones #ThronesYall pic.twitter.com/LwjQgnxWqu

People take TV shows about dragons and magic way too seriously and are really weird about it.

Lady Lyanna Mormont is, and will always be, my Hero. Valar Morghulis pic.twitter.com/739oOgNJUj

Lyanna Mormont, A FUCKING 13 YEAR OLD, HAS DONE HER BEST I WILL NEVER BE OVER HER FUCKING DEATH THANK U SO FUCKING MUCH #BattleOfWinterfell pic.twitter.com/sIB1uqcKnc

Has this person been watching the same Game of Thrones that killed off Mycah the butcher’s boy, the farm boys were burnt to a crisp, and Shireen was literally burned alive after being tricked by her own mother and father?

HOW DARE YOU KILL LYANNA MORMONT. SHE WAS JUST A KID 😭😭😭 #GameofThrones pic.twitter.com/BUEq6hSMey

It really appears that the Game of Thrones TV writers elevated Lyanna Mormont into something just because fans liked her instead of her arc in the actual storyline and what she had done in the ASOIAF books.

RELATED: 65 MORE Of The Best ‘Game Of Thrones’ Memes From The Battle Of Winterfell To Get You Ready For Episode 4