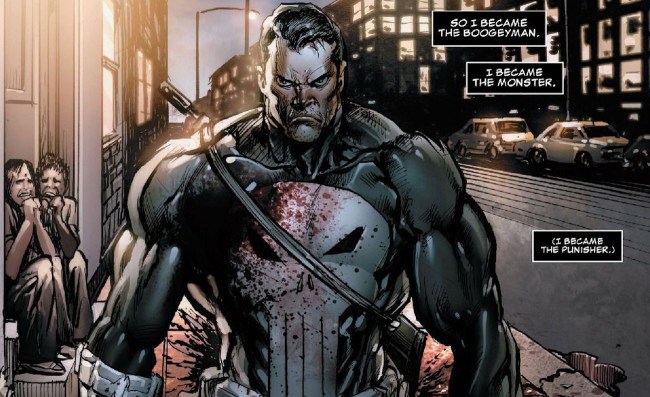 Despite having made my living on the internet for the last five years, there are still stories — one or two a week, probably — that retain the power to absolutely floor me. Doesn’t matter what it’s about, whether it’s Ben Affleck’s Finsta or Drew Brees’ three-day-fall-and-rise, the internet will always have the ability to surprise me.  This story about the recent use of the Punisher skull and the creator’s fight to reclaim it define that phenomenon.

Apparently, the iconic skull logo donned by the extremely murderous, borderline terroristic vigilante Frank Castle, a.k.a. Punisher, has been spotted on police officers during the George Floyd protest, most notably in Detroit:

Here are some photos of Detroit police apparently from today. Can anyone explain the skull? Given the use of the totenkopf by the SS, doesn’t it seem just a little bit inappropriate?? pic.twitter.com/j3KES75kcb

The list of problems with government law officials using a SKULL as their insignia is as extensive as the day is long, but let’s start with the basics: the symbol itself “was inspired by similar imagery of the totenkopf, the skull-and-crossbones used by military forces in the German Empire and, most infamously, the Nazi SS, in the 19th and 20th centuries,” according to io9. Allow to me go out on a limb here by pointing out that echoing the oppression of the Nazi Schutzstaffel is not a good look. Very bad look, in fact.

As a result of these viral images, Punisher co-creator Gerry Conway took to Twitter to announce a fundraiser project being launched in an effort to reclaim the symbol from “lawless police oppression”.

“I’m looking for young comic book artists of color who’d like to participate in a small fundraising project for #BLM to reclaim the Punisher skull as a symbol of justice rather than lawless police oppression. Respond and follow so we can DM,” Conway wrote on Twitter.

I'm looking for young comic book artists of color who'd like to participate in a small fundraising project for #BLM to reclaim the Punisher skull as a symbol of justice rather than lawless police oppression. Respond and follow so we can DM. https://t.co/QqnHNiPvzw

As for Marvel Comics’ stance on the symbol’s appropriation, representatives for the company pointed io9 to the following official statement:

“We stand against racism. We stand for inclusion. We stand with our fellow Black employees, storytellers, creators and the entire Black community. We must unite and speak out.”

This is not the first time that Conway — who co-created Punisher in the early 70s — has made clear that the character is not someone to be idolized, as he told Syfy back in January 2019 that “when cops put Punisher skulls on their cars or members of the military wear Punisher skull patches… they’re embracing an outlaw mentality.

“The vigilante anti-hero is fundamentally a critique of the justice system, an example of social failure, so when cops put Punisher skulls on their cars or members of the military wear Punisher skull patches, they’re basically sides with an enemy of the system,” Conway said.

“They are embracing an outlaw mentality. Whether you think the Punisher is justified or not, whether you admire his code of ethics, he is an outlaw. He is a criminal. Police should not be embracing a criminal as their symbol.”