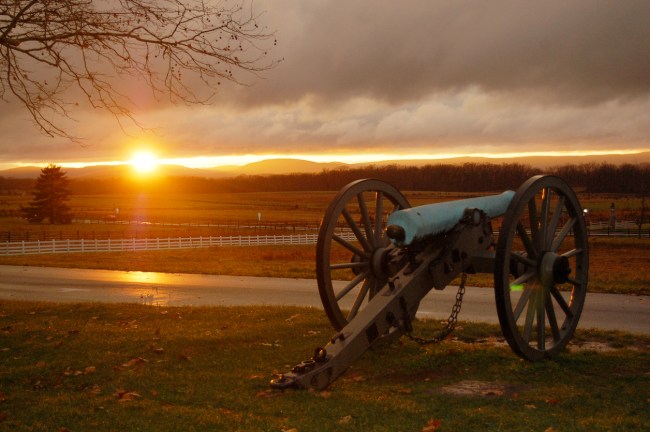 Folks – it’s officially spooky season. There are few places in America spookier than the hallowed grounds of Gettysburg, Pennsylvania. The three-day Battle of Gettysburg marked the bloodiest battle of the Civil War, with over 40,000 casualties on both the Union and Confederate side.

Over 150 years later, the battlefield and surrounding area remains a hotbed of paranormal activity.

I grew up just down the road from Gettysburg, about 20 miles on the other side of the mountains. Many people in the area, including myself, believe Gettysburg is haunted. We visited the battlefield semi-annually for field trips and heard it all growing up, from both ghost-hunters and civil war historians; tourists spotting soldiers in full Civil War uniforms at Devils Den and Little Roundtop before vanishing in mid-air, 1800s farmhouses that served as hospitals after the battle where apparitions slam doors or bang on pianos in the middle of the night. Stories from college students about “Lady in White” that roamed the campus of Gettysburg College, where its Penn Hall served as a particularly bloody hospital during the war. As the legend goes, it’s the ghost of a widow who committed suicide after losing her lover in the war.

Another one of my favorite spooky hot spots: The Cashtown Inn, a bed and breakfast and restaurant just west of town. Nestled in apple orchard country west of town, the Inn served as a headquarters to Confederate officers – has had all sorts of ghost sightings over the years, prompting it to be featured on season four of Ghost Hunters.

Whether you believe in ghosts or not, Gettysburg definitely has a certain energy to it. It’s a sacred, somber place. At night, the battlefield is a very uneasy kind of pitch black – It’s easy to spook yourself out, even if it’s just  a deer or the wind rustling some oak trees.

Which leads us to this recent alleged ghost sighting in Gettysburg. This Gettysburg ghost video was captured by New Jersey resident Greg Yuelling, who was visiting the historical battleground with his family on September 2, 2020.

Two ghosts run past the camera, prompting him to come to an immediate stop.

Is this a haunting?

Not going to lie, the video sends a sharp chill down my spine.

Greg Yuelling elaborated on his Gettysburg ghost video, noting that it freaked his entire family out. via The Irish Sun:

“We just went there as tourists, to learn more about the history of the Civil War and see the old battleground, where the Gettysburg Address was given and all that stuff… We were driving along one night and we started hearing noises, I heard things to the left and my uncle heard things to the right, and there was a fog, but the fog was weird, it was only in one patch not dispersed. Then we saw these shapes moving in the darkness, they were the size of humans, one of them ran right through the cannon…. it was weird, it was scary, it was crazy. My uncle got so scared he rolled up the window.”

“We went back and watched the videos over and over again, and then we blew them up on the big screen to get a closer look. That made us even more freaked out.”

“It was really exciting, but I also got this strange, ominous feeling, like something was telling me to go back there,” Yuelling said, adding: “I couldn’t go to sleep but I was creeped out, so I didn’t go.”

Some people aren’t buying it. The New Jersey Paranormal Research Organization, in particular, is convinced its water droplets on the windshield the video, not a paranormal encounter. Here’s what the ground of ghost experts shared about the Gettysburg ghost video on Facebook:

It appears there’s what appears to be a water droplet on the windshield, and a streak of water it left behind as it rolled down the window. If you watch the black dot towards the bottom of the shot, it moves perfectly in relation to the movement of the entity and movement of the camera together. If you use the dot as a point of reference, you’ll see the streak easily.

Why does this happen? The fact that the windshield/streak is so much closer to the camera than the monuments and cannons in the background, it appears to move independently of the background. However, it’s just a result of the distances of all the points of reference. It’s an illusion. The entities are actually just the light being distorted by the streak on the windshield as the background elements move into the streak. The reason most people are seeing a “ghost” is because they already know about the history of Gettysburg, and our brains will automatically try to make something familiar out of a visual anomaly. In this case, a dead civil war soldier because that’s what we expect. Rewatch the video again and pay close attention to the water droplet circled and how it moves with the ghost. Interesting stuff…

Maybe so, maybe not. I’m pretty convinced that’s two ghosts, especially when you couple it with Yuelling’s account of “noises” right before.

If you want to go down a YouTube wormhole, check out some of the other Gettysburg ghost sightings caught on camera the years. There are some really good ones, including this one of a solider walking slowly in the dead of night.

Real or not, it’s definitely creepy.

What do you think? A highly coordinated stunt to go viral or an optical illusion? Or is it really a ghost?