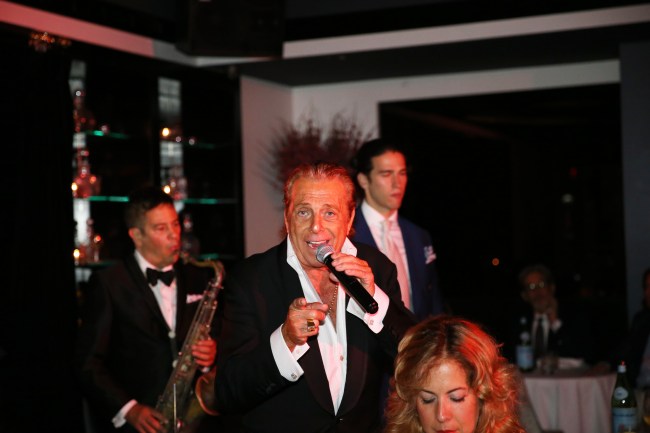 I’ll be honest, I’ve never heard of actor Gianni Russo until today. I’ve seen the actor on screen before, he played Carlo Rizzi in The Godfather whose wedding was the bookends of Francis Ford Coppola’s masterpiece about the Corleone crime family.

I’m PRETTY STOKED that I finally learned who Gianni Russo is because this man is either the world’s greatest story teller/liar or he lived the most batshit insane life in the history of Hollywood. He has a book coming out soon titled Hollywood Godfather: My Life in the Movies and the Mob and in the pages he claims everything from witnessing JFK snort cocaine off the stomach of an actress to getting tortured by Pablo Escobar.

That alone would be enough to sell some books but that’s not even half of the insanity. He also claims that he knows the truth about JFK and Marilyn Monroe‘s deaths, was involved in the 1979 Iranian Revolution, and he helped Marlon Brando’s son beat murder charges. This shit is b-a-n-a-n-a-s.

Ahead of the release of his book, Gianni Russo gave an interview to NorthJersey.com who has some crazy excerpts. ost of his claims are borderline impossible to fact check but he had this to say: “I vouch this is 100 percent of my life,” Russo says. “I lived it, and I stand by what I say.” Let’s start with the bit about JFK snorting blow off an actress:

THANK YOU ALL for helping me celebrate the release of my book “Hollywood Godfather: My Life in the Movies and the Mob” which is available NOW in hardcover from Amazon (link in bio) and your local bookseller as well as on Audible (featuring yours truly as narrator). ∙ ∙ ∙ @amazon @barnesandnoble @applebooks @audible @macmillanbooks @stmartinspress @hollywoodgodfatherpodcast @thegodfathermovie @patrickpicciarelli @meganhoran ∙ ∙ #hollywoodgodfather #thegodfather #giannirusso #carlorizzi #littleitaly #nyc #mob #hollywood #marilynmonroe #franksinatra #johnfkennedy #macmillanbooks #stmartinspress #bestseller #nonfiction

I don’t know who Juliet Prowse was but she passed away in 1996 at the age of 59 and has 24 actress credits on IMDB. This guy also says he knew about the Kennedy assassination ahead of time:

As a teen, selling pens in front of the Waldorf-Astoria hotel, he was befriended by mob boss Frank Costello. The mobster used to rub Russo’s crippled shoulder for luck, until Russo told him hands off. Costello admired his guts — and took the boy under his wing.

Which is how Russo, in November 1963, found himself heading down to New Orleans on an important assignment for his mentor. He was, he relates, to carry a sealed envelope, hand it to “Little Man” — a.k.a. Carlos Marcello, a Louisiana mafioso — in a creole restaurant, and get a verbal message in return. After bumping into some skinny guy coming out of the restroom, he met Marcello and got the message to give to his boss: “Tell Frank it’s on.”
Days later, on board ship, he heard the news of the Kennedy assassination. He also saw a familiar face staring at him from a photograph. It was the man who had bumped into him at the restaurant.

“I didn’t realize who that guy was until I was on the ship and it came over the Telex,” he says. “It was Lee Harvey Oswald in that bathroom. I was all broken up, because I had gotten very friendly, very early on, with senator John F. Kennedy, at the Sands hotel.” (via)

As for the supposed suicide of Marilyn Monroe, he claims it wasn’t a suicide at all, but it was all a plot being driven by the mob trying to acquire compromising photos of then-President JFK:

The mob, he says, had wanted compromising photos of Marilyn, J.F.K. and R.F.K. in order to pressure the Kennedys to lay off their organized crime investigations. When Marilyn threatened to go to the newspapers, she signed her death warrant, Russo believes. She had risked sparking a huge scandal about the Kennedys’ sex lives — and that was something that could not be tolerated. Days later, she was dead — and not by suicide, Russo believes.

“They felt that if she did go, it’s gonna get a lot of negative publicity,” he says. “These are two Catholic boys who are married. They’d lose the Bible belt. He was the first Catholic president, and he won by a very small margin. All they needed was this thing going on.” (via)

The claims in this book are just…A LOT. He goes on to claim that he shot a guy in a night club who turned out to be part of Pablo Escobar’s crime empire:

It happened in 1988, when Russo was running a Las Vegas nightclub, Gianni Russo’s State Street. He tried, he says, to get between an abusive customer and his date. The thug went after Russo with a broken champagne bottle. Russo shot him.
“I feel good about the people I killed, because they were dangerous people, they were harmful people,” he says.

What Russo didn’t know is that the guy he killed was an operative in the Escobar crime empire. And Escobar was likely to come after him and his family, unless he took drastic action. Russo went down to Colombia to explain to Escobar personally.
“I had taken out this very powerful guy, this guy who was supposed to be setting up Vegas for them,” Russo says. “They had been working on that for a year. I didn’t know that.” (via)

He says the torturing stopped once Pablo Escobar discovered the actor had appeared in The Godfather because Pablo was apparently a huge fan of the movie, as was everyone alive at that time.

There’s also some claim about helping Marlon Brandon’s son beat a 1990 murder charge by personally advising him, and helping the shah get his money out of Iran during the 1979 Iranian Revolution which is a moment in history I don’t know a ton about so I won’t even try to summarize that. But you can read the full interview on NorthJersey.com here. You can purchase a hard cover copy of his book on amazon right now for less than $20!

Check out my interview on Fox News Digital and share with your family and friends. God bless. #hollywoodgodfather #thegodfather #foxnews • For the Fox News Digital video go to: https://video.foxnews.com/v/6011313152001/#sp=show-clips • For the Fox News Entertainment story go to: https://www.foxnews.com/entertainment/godfather-actor-gianni-russo-recalls-his-encounters-with-marlon-brando-frank-sinatra-and-pablo-escobar