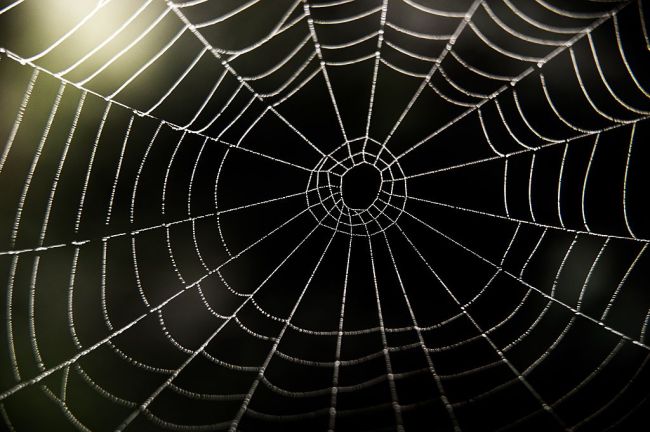 Who had “spider webs large enough to catch humans” on their 2020 bingo card? Apparently, not content with unleashing vast swarms of locusts and murder hornets, nature has given us huge spider webs. 2020 gonna 2020.

We take you deep in a Missouri forest where a massive spider web was discovered. Francis Skalicky, a media specialist with the Missouri Department of Conservation, stumbled into this enormous spider web off a trail near Springfield and posted a photo of the silky trap on Facebook.

It looks like it’s time to burn down all of Missouri. We can’t take a chance on letting these arachnids spread to the rest of the country.

The web was spun by an orb-weaver spider, which “construct organized, circular grid webs that are similar in shape to webs depicted in Halloween decorations.” Their webs are most noticeable in late summer and into fall, when adult spiders reach their largest size.

These spiders are not dangerous to humans; they rarely bite people, and only do so when they feel threatened. The bite is said to be comparable to a bee sting for most people.

“You will see the spider bite the prey, wrap it in silk, wait for it to die, then begin to eat,” according to the Wildlife Heritage Foundation. “As a first step in eating, the spider will literally vomit digestive fluid over the prey. Then the prey is chewed with the ‘jaws’ (chelicerae), and the fluid is sucked back into the mouth together with some liquefied ‘meat’ from the prey. The spider repeats this process as often as necessary to digest, and ingest, all but the inedible hard parts. What is discarded afterwards is a small ball of residue.”

Here is a glorious time-lapse of an orb-web spider creating a beautiful web.