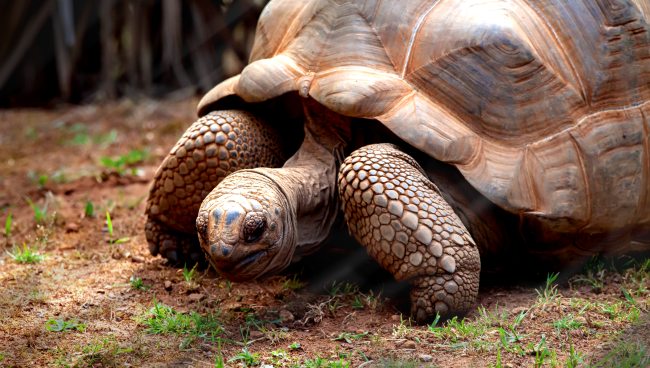 A giant tortoise on the Seychelles’ Frégate island made history recently when it stunned researchers by hunting down a small seabird (very, very slowly) and then eating it.

In video of the unusual encounter, recorded by Anna Zora, the island’s deputy conservation and sustainability manager, a noddy tern chick was perched on a log when it was approached by a adult female Seychelles giant tortoise. What happened next was “completely unexpected,” according to researchers from the University of Cambridge’s Museum of Zoology.

The scientists’ report, published in Current Biology, states, “The tortoise walked directly to the tern at a normal walking pace and reached out with its mouth open when the chick was in reach.

“The chick retreated along the log and was pursued by the tortoise, which continued to attempt to bite. The chick tried to defend itself by pecking at the tortoise without making contact, and fluttering its wings.

“At the end of the log the chick stopped retreating, enabling the tortoise to close its jaws directly on the head of the chick.

“The chick, now dead, was dropped and the tortoise had to climb off the log to retrieve it. Once retrieved, the chick was swallowed whole.

From first approach to the death of the chick, the interaction took 7 minutes in total; the pursuit along the log to the killing of the chick took 92 seconds.”

“It does exactly the wrong thing,” senior study author Justin Gerlach told Live Science, referring to the bird. “If it had hopped off the log, it could have got away easily.”

“It’s clearly trying to injure the bird. And then it goes, it goes all the way and kills it,” he said. He and Zora suspect that the tortoise had experience hunting down terns on logs, given that it spotted and approached the chick from some distance away, apparently knowing that it wouldn’t fly off as an adult tern would.

Although they primarily stick to a plant-based diet, tortoises occasionally snack on the flesh of dead animals, which are likely a useful source of protein, the authors wrote in their report. Although tortoises’ serrated beaks aren’t adapted for biting or chewing flesh, if they manage to swallow an animal whole they can still digest the meat, Gerlach said. Tortoises have also been observed munching on bones and snail shells, which provide the animals with calcium, the authors wrote.

While a very unlikely occurrence, researchers believe that this first documented case of “deliberate hunting” in any tortoise species was in part due to the 265,000-strong tree-nesting noddy tern colony on the island.

“In this first documented observation of a tortoise deliberately attacking and consuming another animal it is notable that during the attack the tortoise approached the chick with its jaws wide open and the tongue retracted. This is typical for aggressive tortoise behavior and is in contrast to feeding behavior where the tongue is protracted in all chelonians feeding on land,” reads the research paper.

“The direct approach to the chick on the log suggests that the tortoise had experience of being able to capture a chick in such a situation, where it was likely to try to remain on the log, above ground-level (as is typical of tern chicks that have fallen from nests in trees). This indicates that this type of interaction is not infrequent for this individual. The observation of other tortoises hunting and consuming birds suggests that this behavior has been adopted by several individuals.”

The authors also added, “In most ecosystems potential prey would be too fast or agile for giant tortoises.”