Movie Fans React To First-Look At Green Goblin In ‘Spider-Man: No Way Home’ 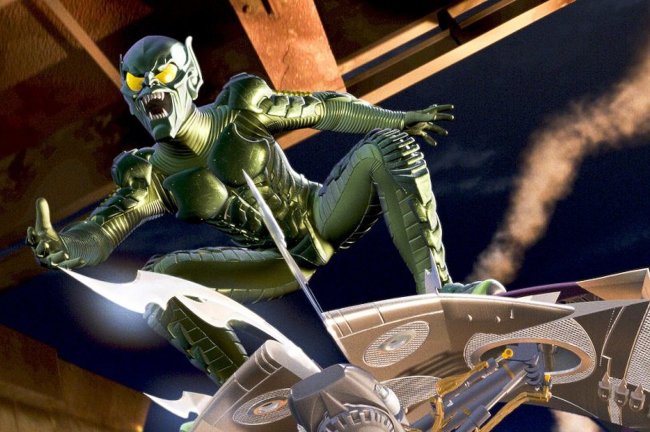 After only hearing his cackle in the first trailer for Spider-Man: No Way Home, fans were treated to the first look at Willem Dafoe’s Green Goblin — who first debuted in the original Spider-Man movie back in 2002 – thanks to the release of the official poster over the weekend. In addition to the glimpse at Green Goblin, the new poster also features Doc Ock’s tentacles, Electro’s lightning, and Sandman’s, well, sand.

Following the release of the poster, Spidey fans across the globe reacted to the return of Dafoe’s Goblin, who’s been a fan-favorite for close to 20 years now:

My spider verse deniers… you really gonna look me in the face after seeing Doc Ock & Green Goblin 100% in the flesh and tell me they NOT bringing in Tobey too?? #SpiderManNoWayHome pic.twitter.com/pOvN4IAlzE

Looks like Green Goblin has some purple on his upper chest 👀 #SpiderManNoWayHome pic.twitter.com/h48sE870BF

POV: *Green Goblin has captured the MCU's Aunt May and he is holding her hostage. Tom Holland's Spider-Man is on the floor, badly injured*
Tobey Maguire: #SpiderManNoWayHome pic.twitter.com/Hglso4bzV6

The helmet looks terrifying. I love it https://t.co/TbdQSWDe4j

The aforementioned villains — Doc Ock, Green Goblin, Sandman, and Electro — aren’t the only villains set to appear in Spider-Man: No Way Home, as some fans believe they caught a glimpse of Rhys Ifans’ Lizard (from 2012’s The Amazing Spider-Man) in the trailer. There’s also the possibility that Michael Keaton’s Vulture, Jake Gyllenhaal’s Mysterio, or even Tom Hardy Venom appears.

Spider-Man: No Way Home — the fourth film in the Marvel Cinematic Universe’s Phase 4 following Black Widow, Shang-Chi and the Legend of the Ten Rings, and Eternals, and 27th film overall — stars Tom Holland as Peter Parker / Spider-Man, Zendaya as MJ, Benedict Cumberbatch as Doctor Strange, Jamie Foxx as Electro, Alfred Molina as Doc Ock, Willem Dafoe as Green Goblin, and perhaps a few more surprises, such as Andrew Garfield and Tobey Maguire as Spider-Man, although their returns have yet to be confirmed. The film is scheduled to hit theaters in the United States on December 17. A movie hasn’t made over a billion dollars at the box office since 2019’s Star Wars: The Rise of Skywalker, but Spider-Man: No Way Home is certainly seeming like it can pull it off.