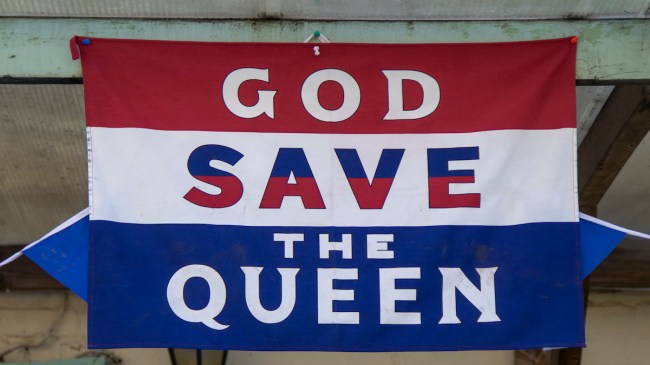 There are certain sentences that are only able to exist because of the internet, and this is definitely one of them: an absolutely ripped dude was spotted doing bicep curls outside of Buckingham Palace as a tribute to the late Queen Elizabeth II.

The footage of the moment is so inherently bizarre that it’s leaving some Twitter users to wonder if it’s the most substantial proof yet that we’re actually living in a simulation.

RESPECTFULLY getting the gains https://t.co/yARdMjG0D5

Pls do this when I die to honor my love of hunks https://t.co/eJL9q5AuFe

Gym beef heads are some of the funniest people alive lmfao https://t.co/ex4EH5t6ug

It’s certainly a contrast to the tribute paid by English soccer legend David Beckham, who reportedly waited in line for over 12 hours to show his respects to the late matriarch of the Royal Family.

RELATED: David Beckham Has Been Standing In Line For Over 12 Hours To Pay His Respects To The Queen

Funnily enough, this isn’t the first time that we’ve seen an exercise-related tribute to a long-serving institutional icon, as the trainer of late Supreme Court Judge Ruth Bader Ginsberg got on his hands and knees to crank out a couple of pushups in front of her casket back in 2020.

Queen Elizabeth II, who was born on April 121, 1926, served as Queen of the United Kingdom for over 70 years until her death on September 8, 2022. On Monday, September 19, a state funeral service for Queen Elizabeth II will be held at Westminster Abbey.