Guy Fieri Doesn’t Love All the Dishes On ‘Diners, Drive-Ins And Dives’ But Is Always Willing To Help 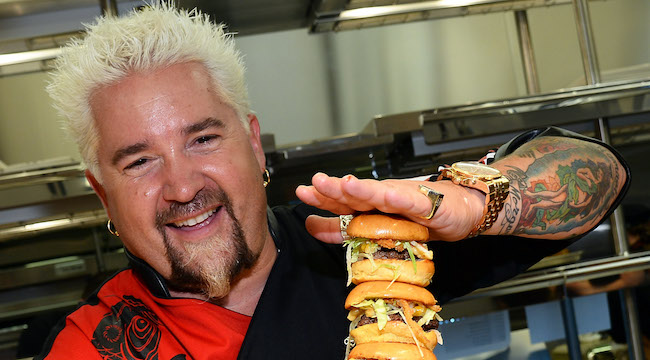 Guy Fieri has visited hundreds of restaurants on his hit TV show Diners, Drive-Ins and Dives. The Mayor of Flavortown is always very congenial and supportive of the up-and-coming restauranters and chefs. One would imagine that all of diners, drive-ins, and dives during the 26 episodes of the hit food show were not Michelin-star-worthy venues. But Guy Fieri seems like a righteous dude and he doesn’t lambaste cooks for their food like other celebrity chefs such as Gordon Ramsay.

Fieri did an interview with Billions creator Brian Koppelman on his podcast “The Moment with Brian Koppelman.” Fieri admitted that he doesn’t love every dish on Diners, Drive-Ins and Dives, but is willing to give advice if asked.

“A close watcher of the show can tell the difference from when you’re genuinely blown away, and when it’s just like, ‘Good, nice job, I can see why people like it,’” Koppelman said to Fieri. “I’m not selling you a bag of beans, baby,” Fieri retorts. Then the fire shirt-wearing Fieri said:

Fieri did say that he is always willing to give constructive criticism and protips to those who ask for his help. But Guy Fieri isn’t going to lecture chefs if his help isn’t solicited.

If they ask, I’ll tell ‘em. I’ll say, “Listen, here’s the deal. You’ve got to treat the bun. You can’t take a bun out of the package [and] put it down. You’ve done all this work. You’ve got this fresh, local beef. You’ve grown the vegetables yourself. You make this fantastic aioli. And then you slap it on a bun out of a plastic bag and you didn’t toast it? You didn’t butter it? You’ve got to give it treatment.” And they’ll look at me [and say], “Really?” And I’ll go, “Yeah, let’s do this. Let’s make it.” And then sometimes before we even leave the restaurant, we’ll go and bust it out a couple times.

I don’t have any problem — I mean, I’ve cooked all this stuff six ways to Sunday. I’ve been around forever doing this, so I know where they’re going to miss it. And, I’m not there to tell them how to change their restaurant — that’s not my job. That’s not what my show is all about. But if they ever ask, I always want to offer advice to them if I can, and help them out. I mean, as we all do as chefs, we all support one another, and we all try to help each other grow.

Despite the memes and jokes, Guy Fieri seems like a great guy like the time he served up free meals to victims and firefighters of the California wildfires.