Guy Invests $20 In Obscure Cryptocurrency, Wakes Up To Discover He’d Become A ‘Trillionaire’ 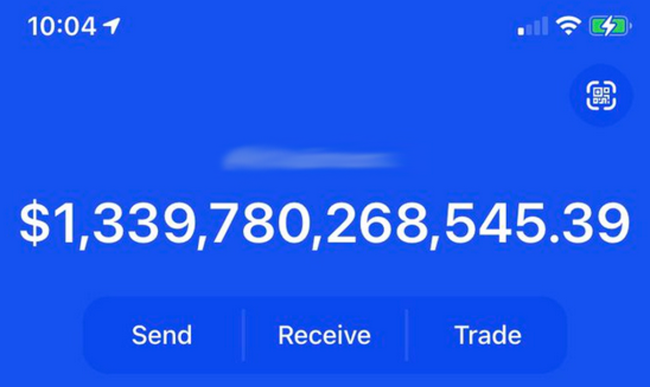 If you haven’t gotten in on investing in cryptocurrency yet, you’re definitely missing out. Where else can you invest around $20 and get a return of $167 TRILLION?

At least that’s what happened to one cryptocurrency investor Christopher Williamson of Georgia who invested in a cryptocurrency called Rocket Bunny this month and became a trillionaire… sort of.

“I woke up, it’s like 9 a.m. and I always check my phone to check how my crypto, to see how it’s doing and I like looked at it, I’m waking up, and I’m just like, ‘Naw, I’m sleeping,'” Williamson told Fox 5 Atlanta.

“I look at it again and I’m like … at that point I fall out of my bed literally, and I run to my desk and I’m logging into the Coinbase app and stuff and I’m talking to my friends, got him on the phone and I’m like, ‘Dude, you need to help me figure out how to sell this now!’ He’s like, ‘Chris, something wrong.'”

I’m gonna need someone to explain what the heck is going on and then write me a check. I got a mega yacht shaped like a penguin on standby. #cryptotrillionaire @RocketBunny2021 @coinbase @CoinbaseSupport @CoinbasePro pic.twitter.com/dyxKvx11WS

When he contacted Coinbase they replied with a short answer saying they would be looking into the issue. He tried getting in touch with Rocket Bunny, but initially didn’t hear back.

“You know when you look at it, it’s like you know there’s no way I’m ever going to get this amount of money,” said Williamson.

New crypto trillionaire Williamson was told by Coinbase that he would not be allowed to withdraw the money from his account because it was an error of some kind.

Well the deadline I gave them to write me my check is near! I’m about to be on some Billy Madison sh*t. 😂🤣 @RocketBunny2021 @coinbase @CoinbaseSupport pic.twitter.com/vyTIyvBGty

Since then, he’s been chronicling this whole bizarre financial situation on social media. At one point in the past week, after trying to put more money into Rocket Bunny to see if it would fix the issue, Williamson’s $20 investment shot up to a worth of over $183 TRILLION.

🤣😂😅if I’m not invited to the #coinbase Christmas party this year I’m going to be ticked off. I think I’m being a pretty good sport about this considering y’all got my account looking like Elon Musk. 😂🤣 @coinbase @CoinbaseSupport @RocketBunny2021 @elonmusk pic.twitter.com/5KuqVXir4r

Day Three – Still a trillionaire according to @coinbase . I’m gonna need an emotional support penguin if this goes into Day Four. 🐧 pic.twitter.com/KKaRqKVGWA

Day 5 – @coinbase @CoinbaseSupport – do y’all remember that scene in the movie Shrek where the little cookie man talks about his gum drop buttons….

for answers or for me to get paid for what I own… 🚀🐇 @coinbase @CoinbaseSupport pic.twitter.com/jrOa9LWQGT

Day 7: I was getting fuel and this guy waves me down as I was leaving and I rolled my window down and he leaned in and was like “ain’t chu dat trilliondaire guy I seen on da tv” and proceeded to “accidentally” drop his drink in my car. 😩🥴 #fixitjesus @RocketBunny2021 pic.twitter.com/htUslIttga

On Monday, Newsweek finally got through to someone with Coinbase and asked what the heck was going on with Williamson’s account.

Coinbase confirmed to Newsweek Williamson’s trillions were not reflective of the actual amount of cryptocurrency he had. The company said his “trillionaire status” was in fact was due to a “display error,” and that its staff in California were working to resolve the issue.

However, Williamson has accused Coinbase has given him “the cold shoulder” and says it has been a painful process seeing his balance soar up to 16 figures — while at the same time being prohibited from withdrawing any of his money.

A spokeswoman from Coinbase told Newsweek that Williamson has been prohibited from withdrawing his funds as it wasn’t the actual amount.

He says Rocket Bunny eventually got in touch with him and has been speaking to him regularly.

“Coinbase has completely given me the cold shoulder and will not respond to emails or tweets, they have not updated me on the situation and my account is still fluctuating in price but up to $167 trillion showing in my wallet,” he said. “This isn’t a Rocket Bunny issue, it is strictly on Coinbase in my opinion.”

Coinbase Support did tweet him a support penguin, as he requested, and said the amount listed on his account is a “display error.”

Sorry @Christo44044658 - the penguin yacht may have to wait - our team is aware of the display error causing this wishful thinking for some ERC20s. They're working to fix - in the meantime, trading the asset will reflect its current market value.

“It’s very frustrating and gut-wrenching to have to look at something like that every day honestly,” Williamson told Newsweek. “When I first saw it all I could think about was all the good I could try to do in this world with just a fraction of it.

“It’s hard to look at, but I’m just trying my best to keep a sense of humor about it and hold my head up. This has been a challenging situation but the media attention has brought very humble, loving, people with words of encouragement into my life and I’m blessed beyond measure for that.”

At this point, he says he really doesn’t know what to do.

“As far as moving the coin out I was able to move ETH but every time I try to move the rocket bunny coin it malfunctions and refuses to let me,” he told Newsweek. “Again no help from Coinbase. It’s like I’ve been blacklisted.”

So, at least for now, Williamson is not only a trillionaire, he is also the richest man on planet Earth.