Guy Points Pistol At His Junk, Accidentally Shoots Himself, Is Hailed A Hero By Gun Enthusiasts 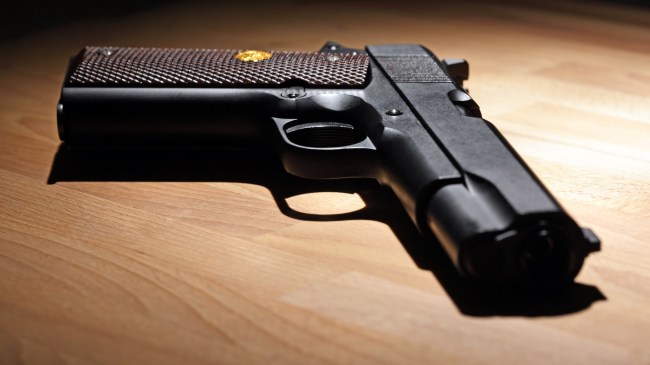 Listen, I don’t have a dog in the never-ending fight between gun aficianados and those who would prefer that all guns be banned. I just want the people who have no business possessing guns, like, say, crazy people and idiots, to not own them. It’s really not too much to ask, is it? I don’t know.

I mean, call me crazy, but if you are dumb enough to point a loaded gun at your own crotch, put your finger on the trigger, and shoot yourself in the junk, I think maybe it’s time for someone to take away your gun privileges.

Then again, I guess pointing a gun at your junk and taking a picture of it is appearently a thing that certain gun enthusiasts do these days, so what do I know?

Now these MAGA dolts are pointing guns at their dicks with the safeties off and their fingers on the trigger to own the libs. I fucking hate it here. pic.twitter.com/O1vVUldLn5

Politics aside, pointing a loaded gun at your nuts just seems like a bad idea, right?

Not if you are one of the gun enthusiasts who have hailed one man a hero after posting a video of himself on August 11 accidentally shooting himself in the crotch on the Facebook group page Loaded Guns Pointed at [B]enis.

I’ll spare you the video, because it’s pretty gross, but if you so desire you can watch it here.

According to Motherboard, here’s what you will get to enjoy…

“Hey [b]ois, I might have f**ked up,” the man who shot himself in the balls wrote above a picture of his naked legs and splattered blood on the carpet of his floor. A towel is stuffed between his legs and a printed out copy of the constitution is crumpled on the edge of the photo.

The guy posted through the incident as he bled. “God’s caliber [.45] went through my scrotum, mattress, boxspring, and floor,” he wrote. Originally the man thought he’d just grazed his balls, but a subsequent hospital visit told a different story.

In the last public post from the man, he’s in a green hospital gown on a gurney. A pink mask is draped across his face and he’s pointing his finger at his crotch like a gun. “Turns out it wasn’t a graze, that round went right the fuck through me,” he posted. “What I thought were two graze wounds, turned out to be an entrance and exit wound.”

Turns out, at least according to an admin for Loaded Guns Pointed at [B]enis, the guy was okay and “actually went to work the next day.” Sure he did.

This bizarre, some would say stupid, turn of events has somehow turned this guy into a hero to many gun enthusiasts.

“The reason we are calling him king is partially because the poor guy already shot himself, don’t think he needs to be chastised as well,” said the admin. “I’m quite sure he’s learned his lesson without the entire world calling him an idiot.”

But… why on Earth would someone point a loaded gun at their junk and have their finger on the trigger?

Basic safety says that you always keep your finger off the trigger until you’re ready to shoot, and that you point it away from yourself and other people unless you mean to shoot them. Shitposters love taking pictures of a loaded gun pointed at their groin, finger hovering just above the trigger, to irritate responsible gun owners.

Now, Loaded Guns Pointed at [B]enis has made the shooter an admin, and the group is making memes of him as their king. In one meme, Barack Obama is giving him a Presidential Medal of Freedom. The group changed its cover photo to a screenshot of the shooter pointing his loaded 1911 at his dick.

“[We] are sick and tired of being demonized as gun owners, and looped together with the alt-right just for owning guns,” an admin of Loaded Guns Pointed at [B]enis told Motherboard in a Facebook message. “We are sick of republicans (think NRA) telling us what to do with our property, and we are sick of being told that just because we like guns It means we have to be anti woman, pro life and pro trump.”

Well, shooting yourself in the junk is certainly one way to get your message across.

Not a very smart way, but it is a way.