Halle Berry Struggled A Bit With The ‘Hot Ones’ Challenge: ‘I Have Sweat Dripping From My Boob’ 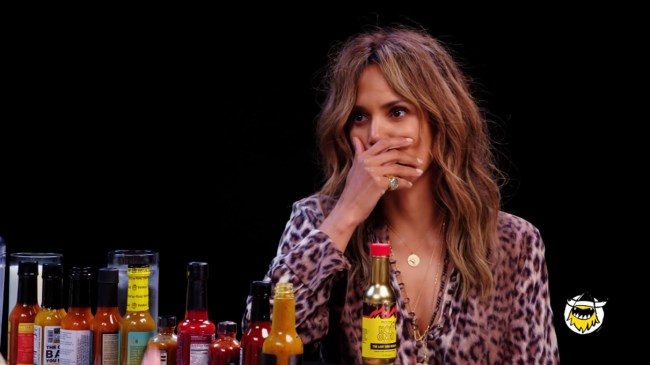 Before we get into the latest episode of First We Feast’s “Hot Ones” Challenge, can I just point out how ridiculous Sean Evans’ job is?

He literally gets to sit down, chat and eat spicy chicken wings with people like Scarlett Johansson, Bill Burr, and Natalie Portman… and he gets PAID for it. That ain’t right.

This week it was more of the same as his guest was none other than the ageless Halle Berry.

During the episode Berry fought like an assassin, refusing to lose to the “Hot Ones” challenge as she shared what it was like training for and doing all those kickass action scenes, including those with the attack dogs, in John Wick 3.

The best question Evans asked though had to be, “Halle Berry is probably the most referenced actress in the history of hip-hop [And the NFL.] Everyone from Biggie to Missy Elliott to Drake. Do you have a favorite Halle Berry reference?”

“No, you know why? I think of these references like my children in a way. There’s no way I could pick one,” Berry responded. “I love all these artists. I’m always flattered when any one of them include me and that they still remember me, know who I am. So to pick one would be like picking like my daughter over my son, you know? I love them all.”

Then, after blowing through the first couple of hot sauces, things began to get spicy.

“This is mean. This is mean! This is not even fair,” Berry said to Evans. “I will die eating these wings right now… before I lose.”

She also did talk about the Rams using her name as an audible call, and spoiler: she did not lose, but it wasn’t easy. Check it out…