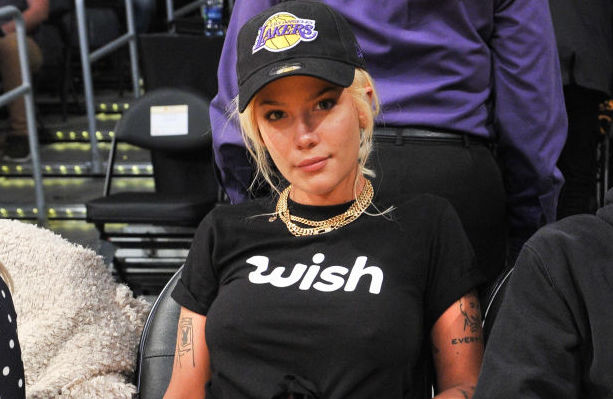 Fuckin’ hell. Just when I thought I couldn’t fall in love with Halsey any more than I already am, I find out she’s created an entire, whole-ass second Twitter account just for the purpose of passionately tweeting about basketball and roasting Kyle Kuzma into oblivion.

Mind you, Halsey was already occupying Undisputed Dream Girl Status. Not only is she insanely talented, internationally famous, and next-level gorgeous, but most importantly, she’s a tattooed Italian chick from North Jersey who knows her way around a plate of spicy vodka rigatoni. And as a tattooed Italian dude from North Jersey who also dabbles in the ancient art of the spicy rig (although I still haven’t figured out how in the fuck Carbone gets that signature curve in their rigatoni), let me just tell ya… sheesh. SHEESH. Women like this do not come around that often, especially from around these parts. Usually — and this is no disrespect to my North Jersey queens — the women around here look more Jersey Shore than they do punk-rock popstar. It’s like finding a unicorn at the West Orange Zoo.

And as it turns out, not only does Halsey have all of the above going for her, but she’s also a MASSIVE basketball fan. Such a passionate fan, in fact, that she created an entire separate Twitter account just to shitpost about the sport, mainly her beloved Lakers.

The account, @Halseyandone, was launched earlier in September and has already become a must-follow for basketball fans, as the feed is nothing but a steady stream of A1 roasts, memes, and other random basketball thoughts.

Me every single game pic.twitter.com/Rbtm7apb2n

nuggets and lakers having a heated conversation pic.twitter.com/IZqc12Op0q

With Halsey’s Los Angeles Lakers now holding a commanding 3-1 lead over the Denver Nuggets — although, as we’ve seen during these playoffs, the Nuggets possibly have the Lakers right where they want them — there’s still time to hop on the @Halseyandone bandwagon now as you know she’s going to be bringing the absolute heat when LeBron brings home his fourth NBA title. And Halsey, never change.